Have you ever written to somebody you admired, hoping for a brief contact you might treasure? Asha (Mahira Kakkar) is an Indian film student in Prague who contacts a film director whose work she enjoys. She expects him to be a much older intellectual, somebody who might have something to teach her. In fact he's a lonely thirtysomething New Yorker, just as keen to learn from her, though he hasn't yet figured out what it is that he needs to learn. They begin to correspond through video messages and gradually a friendship with romantic overtones develops.

This is a format that has been tried before, a cinematic extension of the epistolary novel, but the idea of doing it with filmmakers is more than just a case of the scriptwriters writing about what they know - it allows for a degree of visual creativeness that makes the film fun to watch without stretching credulity. Underlying the images is the subtext that these two people are showing off to each other, with Asha, especially, trying to demonstrate her filmmaking ability, and with both of them initially focused on what's seen rather than what's said.

Rather than embarking on the deep intellectual conversations Asha may have been hoping for, they are definitely getting into the relationship at the shallow end, which makes it all the more of a lurch when Hank suddenly sends Asha tickets to fly to Paris, suggesting they spend a weekend there. She's always wanted to go. Should she trust him? Does he understand what he's doing? Would meeting in person spoil what is developing between them?

Taking on gendered expectations, cultural differences and the power imbalances created by money, the film has a lot more to say than viewers might initially expect. It takes a while to connect with the characters and uncover the interesting aspects of the subtext, illustrating the limitations of realism, but ultimately we do get beneath the skin. Asha is well drawn, a believable individual with a lot going on and with a realistic backstory that gives no hostages to Western viewers' expectations. Hank is more problematic - realistic, yes, but shallow, immature, underdeveloped as a person, so actor Andrew Pastides has a difficult job persuading viewers to invest in him. At first we see two young people with a shared passion. As time goes on their differences appear more and more stark, leaving us wondering how much can be overcome - and, if things don't follow the conventional path of cinematic romance, what else might be gained from these remote encounters.

In the meantime, Asha treats us to a tour of Prague's beauty spots; Hank lets us see something of New York, but primarily its interiors, rather less distinctive. There's a sense of unevenly balanced romance between the two cities, one offering up its heart and soul (even the troubled parts), the other simply assuming that it is already understood, and neither really aware of the ocean between them.

Hank And Asha is a bold attempt at marrying the emerging conventions of the information age with much more established dramatic themes, occasionally leavening this with comedy but nor afraid to move into darker territory when occasion calls for it. It's not altogether successful, sometimes just a little too thin to bear the weight of what it has taken on, but many viewers will find it enjoyable nonetheless. 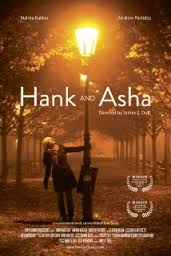 A Czech film student corresponds with a film director in the US, but will their blossoming romance survive a face to face meeting?