Jarred Alterman's beautifully shot and engaging documentary is the perfect example of a good thing in a small package. Although just 54 minutes in length, Convento develops at a gentle yet absorbing rate to explore the lives of the Zwanikkens - mum Geraldine and her two sons Louis and Christiaan. All Dutch by birth, they left Holland along with Louis and Christiaan's father, who has since passed away, to make their home in a derelict Portugese monastery dating back to the 1600s.

Geraldine is a ballerina-turned-artist, while Christiaan is a "kinetic artist", who mixes natural objects such as hare skulls and bird heads with his own style of animatronics to create a sort of surreal puppetry. Louis, meanwhile, seems to simply enjoy being part of the family and the landscape, able to work the land and take care of their animals.

Alterman's camera languidly soaks up the landscape, lingering long enough so that we can appreciate both the beauty of the setting and the surprising dialogue created between it and Christiaan's artwork. Although the idea of using parts of dead animals may sound like something culled straight from a horror movie, when you see them in action, they fit disarmingly well with the surrounding environment.

A case in point is the way Alterman drinks in the aspects of a mechanical donkey that Christiaan has built to replicate the real one that used to draw water up from a well. Despite walking on metal legs, this animal skull/robot mix has a huge amount of personality, with a quirky humour shining out. As Christiaan says while holding up a hare skull at another point in the film: "You already hear his voice."

It is this 'listening' quality that is most apparent in Convento. Alterman is not interested in how the world views the Zwanikkens - there is no exploration of what the Portugese make of this unusual restoration, for example, or of Christiaan's impact in the art industry. Rather, the documentarian concerns himself with how the Zwanikkens view the world, from Geraldine's deep delight in her vegetable garden and Louis's horse husbandry to Christiaan's love affair with the local dump. Sweet, off-kilter and serenly beautiful, Alterman's film provokes contemplation long after it finishes. 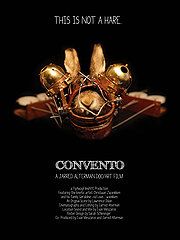 A dreamlike documentary about an unusual family of artists who live in an old monastery.

Convento and the uncoventional