If you suspected your husband was having an affair, what would you do about it? Confront him with an incriminating text message, exact revenge or suffer in silence? Chances are you would not plump for the option taken by gynaecologist Catherine and hire a hooker to tempt him further and then bring you the details. Needless to say, this pro has a lot of cons and it isn't long before Catherine's life as she knew it begins to disintegrate.

As set-up goes, Chloe - based on Anne Fontaine's 2003 French film Nathalie - is as pulpy as they come and the rest of the plot is as saturated in cliche as it is in style. Anyone who has watched even one 1990s sexually-charged thriller - The Hand That Rocked The Cradle, Single White Female, Butterfly Kiss, take your pick - will find the territory disappointingly familiar. The character of Chloe (Amanda Seyfried) is so OTT that it is almost impossible not to spot the film's ultimate destination before it has got out of the traps - so those looking for twists in their tale will be greatly disappointed. However, once - and if - you accept that this is a B-movie plot, it is possible to find a level of enjoyment from its undeniably A-movie trappings.

Julianne Moore, commendably, finds depths in Catherine beyond those offered to her by the script and Atom Egoyan's use of glass and clean lines has an austerity which mirrors her emotional emptiness. Seyfried just about keeps a lid on the more outlandish aspects of Chloe and she and Moore have plenty of chemistry, while Liam Neeson as the husband under surveillance is given little to do but does it well.

Less successful is the sub-plotting with regard to Catherine's son Michael (Max Thierot) - whose character appears to have been based on Harry Enfield's Kevin The Teenager, so high is his strop-factor and so low his resemblance to a real human. Still if the scripting has all the finesse of a sack of potatoes, the look is sleek and the end result is an enjoyable enough romp, proving - if nothing else - that some thriller plots will never go out of style. 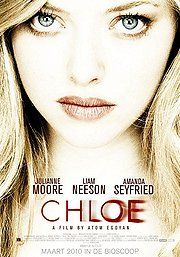 When a wife hires a prostitute to test her husband's fidelity, trouble isn't far behind.