Bonsái: A Story Of Love, Books And Plants

Cristián Jiménez likes quirkiness and his enthusiasm for it, evidenced in his first film Optical Illusions and again here, goes a good way to convincing you to take the ride. The trouble is that he embraces complication to such an extent, that he sometimes threatens to crush the life out the interesting ideas of love, loss and self-esteem and self-delusion that lie beneath his flourishes. For all that, this adaptation of Alejandro Zambra's novella shows that he is an imaginative - if occasionally unruly - talent to watch.

This is the story of Julio (Diego Noguera) and Emilia (Nathalia Galgani) who, a narrator is at pains to point out at the beginning of the film, are destined to meet different fates. "Julio lives, Emilia dies," we are told. And it is partial testimony to Jiménez's skill that knowing these salient facts matters not one jot in the great scheme of things. The point being, perhaps, that the journey is often much more interesting than the destination.

Julio and Emilia certainly start in the same place - hooking up through a shared lie about having read Proust, at the hot end of youth, where passion is panting and love can wait - before the action flips forward to Julio eight years on, with his off-hand relationship with his neighbour/girlfriend Blanca (Trinidad Gonzalez) indicating he has travelled next to nowhere in his handling of relationships. This may sound contrived - but the remembrance of romance past is key to the film's themes, with Julio writing up his memories of first love as a way of covering up his latest lie. After the famous author he is supposed to be transcribing the hand-written notes for decides he's too expensive, Julio pretends he still has the job to impress his girlfriend, detailing his recollections of romance with Emilia as cover.

This allows Jiménez to play around with the shifting perspectives of past and present and also to reflect on the nature of human interconnections - with Blanca seemingly much more able to relate to the emotion contained within Julio's writing than with him. The intricate structure, however, is a fragile thing and - while this may be the source text's fault - the 'devices' stack up, including rather twee segments concerning the bonsai tree of the title. That said, the film still has considerable humour and charm, particularly in its portrayal of the fumblings, posturings and overexuberance of student love. 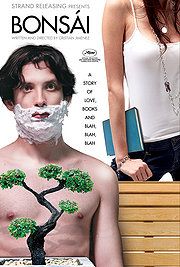