If you're an outsider to the LGBTQ+ community, it can be difficult to understand why leather dykes are so controversial and why what happened in San Francisco in the Nineties was so important. of course, not everybody is comfortable with the idea of practising bdsm (the acronym stands for bondage, domination, submission, sadism and masochism - if it seems odd that one S is missing or that it's routinely written using small letters, consider that an act of sadism against grammar purists). Why, though, should it be politically sensitive? To understand this, it's important to reflect that a lot of what constitutes modern lesbian identity was built up in opposition to male-dominated heterosexual norms. It focused on women being qualitatively different from men - and to many , that meant that mentally healthy women could not possibly be violent or aggressive. Women, the argument went, were by nature better than that.

The consequence of this thinking meant that leather dykes and other women with similar inclinations were not only hated by homophobes, they were also hated by a lot of lesbians and by others in the wider community who wanted to show solidarity with those women, as well as by straight feminists who felt that they were letting the side down. "We just upset people on so many different theoretical levels that our presence in the women's movement was really intolerable to most feminists at that time," says Pat Califia in this documentary.

Setting out to chart the development and experience of the scene that sprang up around these outsiders among outsiders, Michelle Handelman's documentary, which has gained quite a reputation since it was first released in 1995, features a interviews with a number of people who have since become big names in LGBTQ+ circles, if not beyond. It also incorporates archive footage of leather dyke pride marches (an important form of activism where politicians were trying to outlaw these women's sexuality and consign them to living in secrecy and shame), plus footage taken from scene events, clubs and demonstrations. The latter were (and still are, in other contexts) a form of outreach aimed not simply at encouraging more women to explore the boundaries of their sexuality, but at ensuring that newcomers knew how to do it safely. Many of the practices that bdsm practitioners may choose to engage in are potentially dangerous, but - as with extreme sports - can be made much, much safer if approached in the right way.

This is where the film becomes a little strange, because we don't see much of what's being talked about. There's very little rope bondage, a major area where things can go wrong (with badly tied or badly positioned knots leading to ropes cutting off blood supply) and there's practically no heavy play. Instead we see some whipping (perhaps hard for the censors to complain about in light of its prevalence in popular entertainment such as sword and sandal epics), a bit of light spanking and an awful lot of clothes pegs. Seriously, they're so multitudinous that one begins to wonder if a clothes peg company secretly sponsored the film.

There's not enough here for the film itself to serve as a guide to newcomers, but that's not really what it's for. If you're a curious outsider you will get a brief flavour of some things that you may want to investigate further. Beyond what's expressed verbally, there's not much that's explicitly sexual outside a bdsm context, so men who just want to lech at lesbians needn't bother. Where it really delivers is in capturing a hidden history, and this is something likely to be of interest to viewers regardless of their own sexual preferences. It's also important in giving leather dykes a chance to voice their own perspectives on feminism, and to portray a world in which women are every bit as passionate, daring and willing to break boundaries as men. 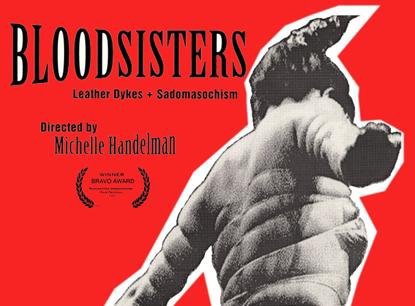