Mining the story of Butch Cassidy from the perspective of what might have happened if the outlaw hadn't been killed in Bolivia sounds like a gold dust idea on paper. Unfortunately, like many an Old West prospector's treasure, while Mateo Gil's movie has a good-looking gloss, its substance is more fool's gold that fortune.

None of the fault lies with Sam Shepard, who is perfectly cast as the grizzled, ageing Cassidy - now living under the name James Blackthorn in South America. After years of horse farming in a solitary life punctuated only by a spot of side romance, he longs to make a reconnection with the man who may or may not be his son back in the US, and so sets about selling up his farm and hitting the trail.

It's not long before he finds his path crossed by that of a stranded stranger Eduardo (Eduardo Noriega) - a thief who contrives to leave them both without cash or transportation. Eduardo manages to live another day, however, by winning the old cowboy over with the tale of cash he has stolen from a local mine, promising to split the spoils if Blackthorn will help him survive.

And so Cassidy reverts to type - and despite this offering scriptwriter Miguel Barros the opportunity to explore the psychology of the outlaw and age, and what this means in terms of responsibility and remorse, he never adequately seizes it. Instead, he tries to draw parallels between the 'old time' partnership Cassidy had with Sundance compared to a modern, more nefarious, type of lawbreaking without ever properly getting to grips with Cassidy's real motivations. Meanwhile, Gil is throwing everything at us - voice-overs, dreamy but rather dreary flashbacks and an unhealthy amount of slow motion.

While Shepard somehow manages to overcome the inadequacies of the script through sheer force of will, Noriega is not so lucky. This means that in between the, admittedly gorgeous looking, riding about - the Bolivian landscape is beautifully captured by Juan Ruiz Anchía - there are large passages of clunking exposition that threaten to grind the whole film to a halt. Characters also come and go with little or no ceremony or flow, adding to the film's messy feel. Eventually, an old nemesis lawman of Cassidy's (Stephen Rea) adds some spice with his appearance but his arrival is too late in the day to prove gripping.

Lovely to look at but less rewarding than it ought to be, the depth of the film never manages to live up to the breadth and magnificence of the landscape. 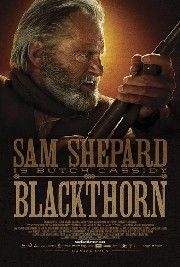 What would have happened to Butch Cassidy if he hadn't died in Bolivia?