Adam (Hugh Dancy) lives alone in a New York City apartment following the same old patterns day after day. His life is shaken up by the appearance of Beth (Rose Byrne), a teacher and amateur writer.

That two young and attractive people should fall for each other seems perfectly in keeping with the natural order of things, but the complication is that Adam is afflicted with Asperger’s Syndrome.

Asperger’s was defined by Austrian Hans Asperger in 1944. Victims exhibit significant difficulties in social interaction along with repetitive patterns of behaviour and interests. Of course it is all a matter of degree and I’d be hard pressed to tell a mild Asperger’s sufferer from, say, anyone who attends Comic-Con in costume.

The rules of Hollywood melodrama have often thrown together beautiful people and saddled one party with a problem which will jeopardise the outcome - from Bette Davis in Dark Victory through Ali McGraw in Love Story, the course of true love never runs smooth. Oh and before you panic, Adam is nowhere near as traumatic as those movies. The other romantic archetype here is dating the person your parents do not approve of. Beth’s parents see all the pitfalls of her new paramour and are all too happy to share. Beth’s dad (Peter Gallagher) has problems of his own involving financial scandal which intrude into the lives of our protagonists.

Apparently Asperger’s is in vogue and this was the second Sundance movie to deal with the subject, the other being Mary And Max. Also on the festival circuit the much darker Nothing Really Matters and the Robert Pattinson starrer, How To Be, all touch on aspects of social dysfunction and their impact on relationships.

Rose Byrne just gets better and better, who’d have thought that playing a Senator’s hand maiden in a Star Wars movie would be a springboard to cinematic glory? While none of her roles have been as showy as that other hand maiden alumni, Keira Knightley, Byrne is accumulating an impressive dramatic resume.

Hugh Dancy is also something of a revelation. By virtue of this performance being miles removed from his other work, he actually seems younger here. Like Byrne, his accent is flawless and you would never know that either of them were not to the USA born.

Adam picked up the Alfred P Sloan award for its science references at 2009's Sundance... they said it was selected “for its credible and moving portrayal of an engineer with Asperger's Syndrome whose passion for science helps him in his struggle to achieve a meaningful relationship.” An unworthy thought enters my head that the science is really a manifestation of the character's affliction and the panel couldn’t find any other movie with a scientific basis at the festival. Having said that, the machinations of the plot might indicate that if the film had continued past its end credits it might well have become a worthy contender.

Overall the film is mostly gentle with winning performances and laughs along the way but doesn’t really begin to work for me until the closing minutes, leaving one pondering just what will happen next. Too much for this tired old cynic, I’m too busy laundering my Jedi robes before setting off for Comic-Con anyhow. 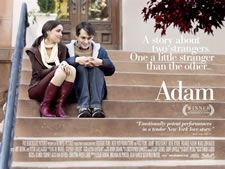 A man with Asperger's syndrome falls in love and has to face his girlfriend's disapproving family.

Mary And Max
My Name Is Khan