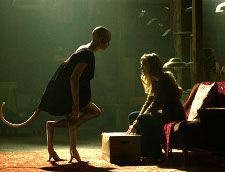 The 9th Sci-Fi London Film Festival runs from April 28 to May 3 at Apollo Cinema Piccadilly Circus with satellite events taking place at the Curzon Soho, The Royal College of Surgeons, BFI Southbank and Proud Central Gallery.

The festival will open with a screening of controversial genetic horror Splice - starring Adrien Brody - and close with Swiss space thriller Cargo.

All-nighters this year include Manga, Japan, Comedy and Starcraft II. There will also be a sneak preview of Philip K Dick adaptation Radio Free Albemuth.

Kamui: The Lone Ninja
Ninja-tastic adaptation of the famous manga.

Cargo
Trouble brews in the cargo hold of a spaceship.

Eraser Children
In a futuristic totalitarian state, where human memories are literally converted to fuel, one man becomes convinced he can save the world.

1
Adaptation of Stanislaw Lem's One Human Minute, sees bookshop staff incarcerated because copies of a book describing everything that happens to everyone on the planet in the space of a minute are found on their shelves.

Drones
An office worker discovers one of his colleagues is an alien.

Vampires
Mockumentary about a family of vampires.
A-Z of Sci-Fi-London 2010 reviews >>>