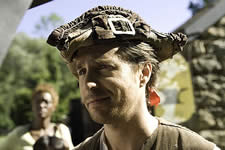 This independent festival is "dedicated to fostering and promoting independent film in the UK and around the world". More than simply a festival, Raindance also runs training courses for up and coming film-makers and also hosts the British Independent Film Awards.

Now in its 16th year, the festival will open with Sam Rockwell starrer Choke and run from October 1 to 12. New to the festival this year is an Audience Award, to be voted for by the audience and the rather cumbersomely named Dailymotion Short Circuit Award which aims to "search for budding new talent".

Got a feature or short film screening at Raindance 2008 and want us to review it? If you have a screener, please feel free to send it to us.

Zebra Crossing
A young man growing up in south London tries to escape from a life of crime and violence.

Senseless
A businessman is abducted and deprived of his senses one by one as his torment is broadcast live over the internet.

The End - Confessions Of A Cockney Gangster
Members of the East End underworld talk about their life and times.

Clubbed
A lonely factory worker drifts into the underworld after taking a job as a bouncer.

Hush
Cat and mouse thriller sees a young couple fall foul of a trucker on the motorway.

Bonne Année
The events leading up to a hit gone bad.

Choke
A sex-addicted med school dropout pays his mum's hopital bills by running a restaurant scam... but with her memory fading fast, will he ever find out the truth about his dad?

Fine, Totally Fine
A gentle, witty character study that takes in a panorama of small-town eccentrics.

Turtles Are Suprisingly Fast Swimmers
A young woman in small-town Japan leads a dull and solitary life, until she stumbles into a local spy ring.
A-Z of Raindance Film Festival 2008 reviews >>>

A Flick of independence
David Howard and Faye Dunaway talk about making British horror on a shoestring budget.
Want to do the Raindance?
We take a look at this year's programmes and pick our five films to watch for.