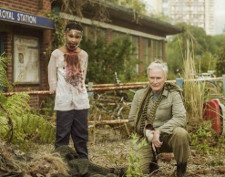 The Girl With All The Gifts

The Swiss-Italian festival with a passion for auteur cinema returned for its 69th edition. It opened with zombie thriller The Girl With All The Gifts, showing outdoors in the Piazza Grandeto an audience of thousands, and will feature retrospectives dedicated to the work of Alejandro Jodorowsky and Abbas Kiarostami.

The festival ran from the August 3-13.

Endless Poetry
Biographical tale of the director's own youth.

Glory
A railway worker finds a large amount of money on the line and duly hands it over to the authorities, who give him a watch, which stops working.

Marija
A young cleaning women, suddenly unemployed, is willing to do anything to fulfil her dream of owning her own hairdressing salon.

The Ornithologist
An ornithologist searching for black storks is swept away by rapids and awakens in a mysterious, dark forest.

The Girl With All The Gifts
A scientist and a child make a bid for survival in a world of zombies.

Jason Bourne
Bourne tries to uncover the secrets from his past.

I, Daniel Blake
A carpenter suffering from ill health and a young single mum find themselves facing a wall of welfare bureacracy.

Loach back on the barricades
Director’s Cannes return blasts welfare system and says we must fight from within Europe.