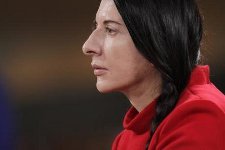 Marina Abramovic The Artist Is Present

Back with more fascinating films in 2012, Sheffield DocFest looks set to continue its tradition of promoting great talent, offering vital industry networking opportunities and giving the public a chance to get closer to the action. This year's programme features 120 films with 300 speakers, and opened with Penny Woolcock's From The Sea To The Land Beyond. We'll be bringing you news and reviews throughout.

Fire In The Blood
A look at the struggle to make anti-retroviral ADS drugs available to infected people worldwide, no matter their financial resources. Read what Dylan Mohan Gray told us about making the film.

Grandma Lo-Fi: The Basement Tapes Of Sigríður Níelsdóttir
The true story of the elderly woman who, by chance, started making experimental music with ordinary household objects, and became a cult star.

The Globe Collector
Meet Andrew and his amazing collection of lamps.

How To Survive A Plague
The story of Act Up and the ordinary people who transformed the tratment of AIDS.

Call Me Kuchu
The story of the Ugandan campaigners who have spoken out against the country's proposed Anti-Gay Bill.

Big Boys Gone Bananas!*
The story of how Dole food corporation tried to suppress a documentary about them.

The Other Dream Team
The 1992 Lithuanian National Basketball Team went from the clutches of Communism to the Summer Olympics in Barcelona – a testament to the powerful role of sports as a catalyst for cultural identity.

Searching For Sugar Man
The true story of a brilliant yet forgotten musician and the revolutionaries he inspired on another continent.

Ai Weiwei: Never Sorry
Renowned Chinese artist and activist Ai Weiwei has garnered international attention as much for his ambitious artwork as his political provocations and increasingly public clashes with the Chinese government.
A-Z of Sheffield DocFest 2012 reviews >>>

Fired up about inequality
Fire In The Blood's Dylan Mohan Gray talks about HIV/AIDS in the developing world and the problems of Big Pharma.
Unbroken
Emad Burnat and Guy Davidi talk with Jeremy Hardy about 5 Broken Cameras.
A study in scarlet
Catherine Scott and Rachel Wotton on Scarlet Road.
Viva Italia!
Luca Ragazzi discusses his new doc, Italy: Love It, Or Leave It
Snail story
Director Seung Jun-Yi on Planet Of Snail
All at sea
Sheffield DocFest launches with From The Sea To The Land Beyond.