Since the fall of Idi Amin, Uganda has rarely been in the international spotlight. Quietly struggling to climb out of poverty, it has drawn world attention primarily because of its struggles against the Lord's Resistance Army in the north, and African attention because of its interest in the oil in Lake Albert. In 2009, all that changed with parliamentary backbencher David Bahati's introduction of a bill aimed at outlawing homosexuality. Although gay sex was already illegal under Ugandan law, the bill would have introduced the death penalty and obliged members of the public, under threat of imprisonment, to report gay people they knew, even if they were their own children. After a sustained campaign, heads of state around the world expressed their outrage.

This campaign began with one man, David Kato. "I was officially the first gay man in Uganda to be out," he says proudly here. This might seem crazy, given the risk, but Kato felt strongly that unless people like him - kuchus - spoke up, things could never get better. With a gradually increasing group of friends prepared to take the same risks, he set out to challenge anti-gay rhetoric in parliament and in the media, to take up arms against a sea of troubles and, by opposing, end them. This is the story of that group.

One of the popular myths about gay rights campaigns in Uganda (and Africa generally) is that they are led from the West. Although the existing anti-gay laws are a legacy of colonial times, it is now widely believed that homosexuality is a form of contamination by ungodly Western ideas. This film illustrates part of the problem by including footage of American missionaries who have declared the country Ground Zero in their battle for what they see as Biblical morality, eager to impose their own ideas on a population whose prejudices had previously been mellowing as in much of the rest of the world. It also does something else, which is to do away with Western perspectives at a narrative level. There is no voiceover here, just Ugandan activists telling their own stories. What they have to say is all the more powerful as a result.

The stories of individuals tell the story of a nation. We hear about family breakdown, though Kato himself remained close to his mother, who simply hoped, like so many, that one day he would still give her grandchildren. We hear first hand one woman's account of 'corrective' rape. Others are forced to leave their homes to escape threats of violence. Meanwhile we hear from the editor of popular tabloid Rolling Stone, Giles Muhame, about his reasons for running front page stories with headlines like Hang The Gays. His excuses - that he's not advising but quoting; that he's only trying to protect children; that most of his countrymen agree with him - sound depressingly familiar, but ultimately he fails to convince as a man motivated by morality of any sort. He's found a good way to make money.

Despite its grim subject, this is a film full of fight, with all the energy you'd expect from that. It's a film about vibrant, intelligent people with a real love of life, at times imbued with a joy that, for those familiar with the tragedy it discloses near the end, is almost too much to bear. It leaves one wondering what great things these people might achieve if they didn't have to use so much of their strength just to survive.

If you've heard about the Anti-Gay Bill and felt curious, this is your chance to find out more. Call Me Kuchu is a fine example of a campaigning documentary, not afraid to wear its heart on its sleeve. It is a rallying cry for everyone who values human rights. 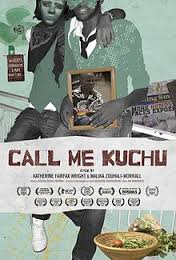 The story of the Ugandan campaigners who have spoken out against the country's proposed Anti-Gay Bill.