Emily James talks about her new documentary on environmentalist activist group Just Do It. 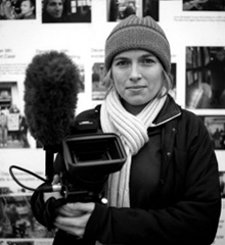 Emily James is an award winning director whose latest documentary, Just Do It, follows the environmentalist campaign group of the same name. I caught up with her at Sheffield's Doc/Fest, where I asked her how she became involved in the project.

Emily: In 2008 I was asked by some people who were involved with Plane Stupid to play the role of videographer on a couple of the actions that they did that year. One was stopping a train outside Drax power station and the other was Plane Stupid occupying a runway at Stansted Airport. I had been working on The Age Of Stupid and was known as a film maker who shared their concerns. So I did that and I could immediately see that there was a dynamic community of people doing something very different from what you saw out there and it was quite clear that there was a film to be made, possibly quite an important one. What I was doing for them was just filming the actual event as it happened and then we would release that tape to the news and it would be footage of them cutting the fences, going on to the runway. That would get lots of play on all the 24 hour rolling news. Then once that news cycle was over it would be gone and would be out of the public eye, and yet they would still be facing all the repercussions...

V.K.: So you wanted to follow it through and create something more permanent?

Emily: Well exactly. What I said was “Look , if we film the run-up to it and the planning and the aftermath , the toll that it takes on your life etc. then we could make something that would really have a longer shelf life and reach a completely different audience and reach them with more context and depth. You wouldn't just be these faceless people shot in night vision cutting your way into an airport.” And basically they said no, flat out no for quite a while.

Emily: Because essentially what I was asking was “Can I come and film you conspiring to break the law?” These people are under constant surveillance. Once you've been on a couple of actions, the authorities know who you are. They often end up following people. They'll attach surveillance teams to key people and nobody really knows the extent of how much they're surveilled. Since I was filming it's come out that there's a number of under-cover police officers that were in place during this period of time, potentially as many as 15 across the country. So there's a kind of healthy mistrust.

V.K: What are your personal feelings about the aims of the activists and their concerns? You're telling me that you have a lot of sympathy for them?

Emily: I do. I have an enormous amount of sympathy and respect for what they're doing. It's interesting because I think people assume that I shouldn't if I'm going to make a film about them. But do you have to be neutral? I don't think you do have to be neutral and I don't think many film makers are, even the ones that are pretending to be neutral. And I'd far rather wear it on my sleeve and say “Yeah, I agree with these people and I agree with what they're doing.” I don't think that harms my ability to tell their story effectively. I didn't feel that it was necessary to be overly critical of them to make a good film.

V.K.: Can I ask you about the technical challenges of filming in the chaotic situations seen in the film?

Emily: Oh yes! Oh man! Crazy! It was very difficult. On a practical level, I was completely on my own, so I had no assistant to carry equipment for me, nobody to run ahead and sort things out, so that was quite challenging. At most, I would organise tape runners, because I was very concerned about carrying anything incriminating on me. I would organise somebody to pick up tapes from me and run them to a safe house. Often I would recruit that person from somebody within the action, as opposed to bringing them with me from the outside, because it was in their interest to do that. I started out filming with a Z1, which is not a massive camera, and found that even that was more than I could manage to carry for that extended period of time, 10, 12, 14 hours a day, so I scaled down to a little A1 camera, which made it a little more viable, and I think that also allowed it to feel less intrusive. It was hard to do camera, sound and producing and directing all at once, and I'm afraid that there are times when the sound suffered, but what can you do?

V.K.: Were there any points when you felt worried about your own safety, with the police for instance?

Emily: Not so much in the moment. I have a press card, and police are often quite careful with their behaviour when a camera is present, so I didn't really fear for my physical wellbeing. In Copenhagen (where the film follows the activists for the climate summit) the policing was pretty heavy-handed. It was psychological. It wasn't about beatings on the street, it was about them coming into where we were staying without knocking, looking through the windows. There were daily raids on the places where the activists were staying and the places where they were working. At one point I was filming at this place where they were organising this bike project. The police came in and raided it and literally said “We don't need to have any papers to come in here, we can search this place. I know that you have rights in the countries where you come from, but in Denmark it's different.” So psychologically it was quite hard work, and I think that pervaded the whole shoot for me.

Throughout the whole year of doing it I was determined that the fact that I was filming would not get people into more trouble than they were getting into on their own. I would have felt like I had really failed if somehow that had happened. Or if the police had come and confiscated my material. So I was very careful. I kept everything at a safe house. If I had been arrested, it would have been very easy for the police to get a search warrant for my property and take anything they wanted. So I had to keep my house very clean of any evidence of what I was doing. And I think during that period I did get quite paranoid about what might happen. I was scared that I would get other people in trouble, scared what the repercussions might be in the long term, and also I was going out on quite a limb professionally and I was scared what it might do to my career.

V.K.: Can I ask you what your hopes are for the film? Do you think it can reach a significant audience beyond people who are already concerned with climate change? Is that what you're hoping for?

Emily: I don't think that the goal of the film is to convince people that climate change is happening. If there's any significant doubt, then they should go and watch An Inconvenient Truth or The Age of Stupid.

V.K.: Do you hope that it's going to make people more sympathetic towards the tactics that these people use?

Emily: Yes. That is precisely it. The aim of the film really is to show who these people are, show the human face of what these people are doing. The really important thing for me is that people who participate in direct action are quite heavily vilified in the media. There's an easy kind of dismissive attitude that pervades the way this area is reported, and I really wanted to take their story to people who hadn't met them, but who probably were negative about them, saw them as a nuisance, trouble making, hectoring... I'd like people to realise that actually in the grand tradition of the suffragettes and the civil rights movement and Gandhi, this is about a group of people who are possibly the most altruistic people you could ever meet in your life. They are not doing this for themselves, they are doing it for all of us and they're actually putting themselves out there, and rather than dismissing them, we should be honouring them, and I wanted to give them their place in history, respect them and reposition this type of political activism for a wider audience.

V.K.: So finally, what's next for you as a director?

Emily: It's very difficult to say. I think it's unlikely I'll do another really independent project like this because it's been a great deal of work, very little money and quite stressful. But I wouldn't go back and do this film in any other way. This is absolutely the right way to have made this particular film. But I'd like to have a break in the form of a budget when I start the project (laughing). I don't have anything in mind. I'm open to offers.

Just Do It will be showing in a number of venues around the country, including Glasgow's GFT in August. Emily will be there with her film.

Out of the shadows Leroy Kincaide on sleep paralysis, his past as a wrestler, and The Last Rite

The feeling of community Lila Schmitz on The Job Of Songs, storytelling, community and the Cliffs of Moher

Beauty is where we are Bruno Dumont on France, Charles Péguy, composer Christophe and going into space