As Surrogates introduces artificial bodies through which users can live out their fantasies, we look at the history of androids in film. 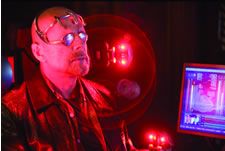 Anybody who has played online role playing games, The Sims or Second Life will be familiar with it - the idea that you can create an ideal avatar who will live out the life you can only dream of having. Now imagine that your avatar could exist in the physical world, that you could control it completely and that you could experience everything its electronic senses brought to it as it moved around - except, of course, for unpleasant things like pain. Would you want to give it a try?

In the world of Surrogates, practically everyone has given it a try - people are hooked. It seems like the perfect way to live until, mysteriously, a series of murders occur which affect not only the artificial bodies but also the people who were connected to them. In order to investigate, the FBI's Agent Greer ( Bruce Willis) has to abandon his Surrogate and go out into the physical world himself. Naturally, nothing is what it appears to be. But just why do we have such a troubled relationship with movie androids, and how did it begin?

The human fascination with artificial bodies goes back a long way, to ancient myths of golems created from mud to do their creators' bidding. One of the first semi-androids we encounter in the modern age is Frankenstein's Monster, who has been portrayed many times in film by actors including Boris Karloff and Robert De Niro. The subtitle of Mary Shelley's book is A Modern Prometheus; she felt that the desire to create artificial beings was something which, sooner or later, was bound to bear fruit, but she was deeply concerned about what might happen as a result. For Shelley the issue was deeply personal, stemming from her inability to produce a surviving child and also the religious conflicts she experienced as a social reformer in a tumultuous age, but it set the tone for many variations on the story to follow.

There are other reasons why we're uncomfortable with androids. People can easily become besotted with non-humanoid robots like R2D2 and Johnny 5, whilst others, who seem like cartoon versions of human beings, are often seen as likeable and non-threatening. But make a robot look too much like a human being and people respond by finding it creepy and unsettling, a phenomenon known as the Uncanny Valley. This, too, is explored in old stories where naive young people are led astray by semi-human creatures who look almost perfect but have subtle flaws about them, indications that they're not quite real and can never quite be trusted.

Isaac Asimov attempted to counter this trend in modern fiction when he created his famous Laws of Robotics, designed to for a framework which would make robots completely trustworthy (something which, of course, real human beings can never be), and this approach has been used to great effect in films like Moon, whose human protagonist struggles to understand his robot companion's persistently helpful nature. Unfortunately, one of the problems with trusting a robot is that it has almost always been programmed by someone else, so one has to be able to trust that person, too - leading to danger from machines like HAL 9000 in 2001: A Space Odyssey and androids like Ash in Alien.

The first major dangerous android on celluloid was in fact way back in 1927, when Brigitte Helm portrayed both a bold revolutionary heroine and the robot clone used to undermine her cause in Fritz Lang's Metropolis. There are references here to Pygmalion - both the George Bernard Shaw play and the Greek myth on which it was based - as the android's inventor, CA Rotwang (Rudolf Klein-Rogge) is shown to be smitten with his creation in a way that borders on sexual infatuation. Yet the android is entirely cold and amoral, without any apparent personal motivation. Where androids develop personalities, too, making them almost human in another way, our instinctive discomfort with them grows, and at the same time we are confronted with uncomfortable political issues.

At what point should we think of an android in the same way we think of a human being? The writer who explored this in most depth was undoubtedly Philip K Dick, though he was far more wary of his android creations than their portrayal on the big screen would suggest. Blade Runner is the best known film derived from his work, and gives us what is probably cinema's most charismatic android in the form of Roy Baty, played by Rutger Hauer. However the audience might perceive him, Roy perceives himself as an individual with a right to life; he also appears to show concern for the mistreatment of his fellow androids, or 'replicants' (crudely known as 'skin jobs'). The issue is complicated by the fact that we never know whether or not Deckard (Harrison Ford), the man hunting him, is a replicant himself - nor, indeed, whether his position is really any different if he's a human being, also mortal and also effectively a slave to the giant corporations that dominate the world.

In other work, Dick skirts more cautiously around the issue. Imposter, which was brought to the big screen starring Gary Sinise, has a hero who may or may not have been secretly altered by alien enemies to replace his heart with a world-threatening bomb. As he flees the authorities with his life on the line, he has to doubt not only the memories that tell him he's innocent but also his status as a human being should he now be partly machine. This has parallels with Arnold Schwarzenegger's performance in Total Recall, where he doesn't know if he's awake or dreaming, a real person or an artificial personality implanted in somebody else's body. But of course, Schwarzenegger's most memorable appearance as an android is elsewhere.

Probably cinema's single most frightening dangerous android, and certainly its most iconic, is the Terminator. "They look human... sweat, bad breath, everything. Very hard to spot," warns Michael Biehn's Kyle Reese, the soldier who travels back in time to try and interrupt the deadly machine's mission. Of course, somebody built like Arnie isn't really hard to spot, and it's reasonable to suppose that characters might feel threatened by him even before they know he's got metal under his skin (the Uzi 9mm certainly helps), so in subsequent films the story's creators employed more subtle agents - Robert Patrick and Kristanna Loken could be perfectly ordinary people until they switch into killer mode. Interestingly, in the fourth film (Terminator Salvation) the writers wanted to explore the boundary between the human and android still further, first by giving us a sympathetic half-Terminator hero and then by turning the series' celebrated saviour of mankind, John Connor, into a Terminator himself. The first idea survived; the second was ditched after it leaked on the internet, leading to a fumbled ending and a film with a lot less punch. Yet audiences' willingness to accept a hero who was part machine marks an interesting shift in our attitudes toward the artificial, paralleled by real life developments as an increasing number of people are walking around with artificial limbs and organs.

Still, the idea of a completely artificial humanoid who is trusted and accepted - and worthy of that - is rare. Aliens and Alien 3 gave us Bishop (Lance Henriksen - "I prefer the term 'artificial person' myself"), but he had to go to extreme lengths in order to win the heroine's trust. Data (Brent Spiner) has become a popular character in Star Trek, whose fans are perhaps more accepting of artificiality. And A.I., based on the Brian Aldiss story Supertoys Last All Summer Long, introduced David (Haley Joel Osment), who is perhaps less threatening because he is a child. In real life, some of the first truly lifelike androids are children, such as Hiroshi Ishiguro's various artificial copies of his daughter.

Though Surrogates may suggest that flesh and blood connections are ultimately much more important than the opportunities artificial bodies could offer us, this isn't the case for everyone, as many people with disabilities or whose bodies are weakening with age are delighted by the chance to enjoy life using avatars, the more realistic the better. Androids are starting to appear more and more in real life as helpers for people in this sort of situation, and because they can do mundane jobs which bore humans with effortless patience and precision. It looks as though we're going to have to get used to them, and the stories told on the big screen are part of that process of social adjustment.

"I was fascinated by how people just became so involved in online games, creating these alternate personas for themselves," says Surrogates writer Robert Venditti. "They became so identified with them that they would lose their jobs, their marriages, because they just couldn’t separate their lives from this persona that they created. It was an idea that stuck with me—the basic human desire to be something other than oneself." But though the film is described as a cautionary tale, he doesn't see its androids as a wholly negative thing. "I don’t know the answers to the questions. When I wrote the story, I wanted people to see the good uses surrogates would present to society, as well as the bad ones. Ultimately, I wanted the readers to make that determination for themselves."

Battle In Space: The Armada Attacks Before The Fire The Bloodhound Climate Of The Hunter Coded Bias Dear Comrades! Film About A Father Who For The Sake Of Vicious Ham On Rye Hunted MLK/FBI Mother Relic Skyfire Stardust

Personhood The Wasteland Hillbilly Elegy MLK/FBI Made In Italy Turned The Bloodhound The Pyramids Of Egypt The Wolf House Film About A Father Who The Trial of the Chicago 7 Dear Comrades! Ham On Rye Battle In Space: The Armada Attacks A Concerto Is A Conversation Mother Skyfire Huntsville Station All In: The Fight For Democracy The Mole Goes To The Beach

Streaming Spotlight: archaeology on film Seven great films about digging up the past

Stay-At-Home Seven: January 11 to 17 Telly and streaming suggestions for the week ahead