Eye For Film >> Features >> Back from the grave

Back from the grave

Author Jamie Russell on the cinematic rise of the living dead. 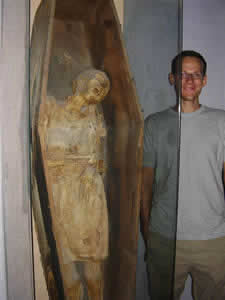 Jamie Russell and a pal

Author of zombie film manual Book Of The Dead, Jamie Russell is one of the star attractions at the Day Of The Undead, where he will be signing autographs and chatting to fans. He took time out to chat about his work.

Jennie Kermode: What first led to you taking an interest in zombie films? Have they been a lifelong passion?

Jamie Russell: When I was a teenager - which was a while ago now! - Jonathan Ross used to host this TV series called The Incredibly Strange Film Show. Every week he'd go off and track down some weird cult cinema oddity like Ed Wood Jr or Doris Wishman. One night I tuned in and he was showing clips from what I later learned was Dawn Of The Dead. There were snippets from the "securing the mall" sequence and also the "helicopter-refueling" scene where a zombie gets its head chopped open by the whirling rotor blades.

I'd never seen a zombie movie before and what grabbed my attention was the idea of being surrounded by millions of ghouls with nowhere to escape to; I had really bad nightmares that night but I knew I had to watch all of George A Romero's movies. It kind of mushroomed from there... Many years later - still having nightmares about zombies - I decided to try to find out what it was about these "fugitives from the undertaker" that troubled me so much. But on checking the library, I realised no one had ever written a serious study of zombie cinema.

JK: Which do you consider to be the best zombie films out there and which are your personal favourites? Do you prefer old fashioned, slow zombies or modern, fast ones?

JR: Personally, I find slow-moving zombies far more disturbing than their fleet-footed counterparts. The claustrophobic, apocalyptic feel of the classic Romero-style zombie movie is what really scares me. Plus, slow zombies - like the blind Templar Knights in De Ossorio's Blind Dead series - remind us of the inevitability of death. No matter how fast you run, death will always catch up with you!

As far as my favourite movies go, I've got a pretty eclectic greatest hits list: the Romero films (obviously), lots of Seventies outings like The Living Dead At Manchester Morgue, Tombs Of The Blind Dead, The Grapes of Death; the fantastic Dellamorte Dellamore and the very funny Hong Kong flick Bio-Zombie. Guilty pleasures include cheesy gorefest Nights Of Terror and the horror comedy The Video Dead. I also think Fulci's zombie series - in particular The Beyond - doesn't often get the respect it deserves. His films are horror cinema's answer to surrealism: zombie Dada!

JK: Do you feel horror like this has an important contribution to make to cinema as a whole?

JR: Very definitely! What I love about horror cinema is how it makes us confront all the anxieties we keep repressed in our daily lives. The critic Susan Sontag once pointed out that in the Fifties, the only movies to really grapple with people's fears about the nuclear age were trashy bug-eyed monster movies - the issue was so terrifying it could only be dealt with in cheesy movies. Zombie movies do much the same thing, repackaging our fears about death and the afterlife in similar ways.

JK: How did you become involved with the Day Of The Undead festival?

JR: In 2006 I was invited to attend the festival but I was on a year's sabbatical out in Mexico at the time and couldn't go. I was gutted because I really wanted to see the zombie LRPG! When the organisers were kind enough to invite me again this year I jumped at the chance. I don't think I'll ever have been in the company of so many zombie fans. It's such a great festival - the UK is very, very lucky!

JK: Will you be getting made up as a zombie like other attendees at the event?

JK: How hard is it for fans to get to see good zombie films in the cinema, and what would you recommend to those trying to seek them out by themselves?

JR: I think most zombie fans know that they won't see many living dead movies playing at their local multiplex. Let's face it, being a "deadhead" is a triumph of hope over experience: most zombie films are pretty rubbish but we love them because of the bigger things they represent and bcause they exist outside the mainstream. For every big budget, Hollywood style outing like Resident Evil: Extinction, there's at least another 30trashy straight-to-video efforts like Wise Guys Vs. Zombies. So, I think any dedicated zombie fan is used to trawling the Internet for news about new releases, checking out Ebay for hard to find copies of old movies and just generally operating under the radar of most mainstream moviegoers' interests.

JK: How do you expect the zombie film genre to develop in the future?

JR: At the moment, we're in the middle of a zombie renaissance. When I started writing Book Of The Dead around 2001, nobody was particularly interested in the living dead. Zombies were dead (pardon the pun) - fondly remembered ghouls whose heyday seemed to have come and gone somewhere between Night Of The Living Dead in 1968 and Dawn Of The Dead in 1978. Then, all of a sudden, they came back from the grave with a vengeance. A lot of that was to do with the success of the Resident Evil videogames and the surprise hit 28 Days Later.

It suddenly snowballed into this massive surge of interest that's peaked over the last five or six years. From videogames like Dead Rising to zombie "flash mob" events to novels like Max Brooks' World War Z, zombies seem to have entered popular consciousness in a way they never have before. So, in terms of the future of the genre, I'd like to see it stay as popular as it currently is. Zombie comics and zombie novels are really thriving at present so perhaps they'll inject zombie cinema with some fresh blood.

JK: What about your own plans for the future? Do you have any further books on cinema on the way?

JR: Book Of The Dead has been really well received by fans (thanks guys!) and so FAB Press and I have been thinking about a second edition - there have been at least 100 new zombie films released since the book was published in 2005. I've been stockpiling zombie DVDs with that in mind - although my long-suffering wife isn't too happy about being subjected to another bout of zombie-mania. She still hasn't forgiven me for forcing her to sit through The Stink Of Flesh...

For more information on Day Of The Undead visit the official site.

Buy Jamie Russell's Book Of The Dead: The Complete History Of Zombie Cinema

Celebration James Vs His Future Self Knives Out Military Wives Motherless Brooklyn The Perfect Candidate Resistance Standing Up, Falling Down The Street System Crasher Toni Morrison: The Pieces I Am Vivarium

The Street A Son James Vs His Future Self In The Quarry The Golden Harvest Three Summers Those That, At A Distance, Resemble Another Paradise The Perfect Candidate Resistance Fire Will Come System Crasher Ecstasy Vivarium The Truth 1982 Dogs Don't Wear Pants Human Capital The Other Lamb The Dog Doc