Eye For Film >> Features >> Racism and rights of passage

Racism and rights of passage

Actor Stephen Graham discusses his role in this year's most talked-about British film, This Is England. 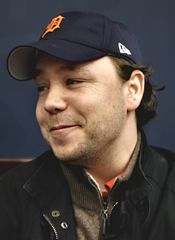 Stephen Graham gets ahead in a hat Photo: Stuart Crawford

Far from the ex-con hard man he plays in This Is England, Stephen Graham in person is very relaxed and personable, albeit a little sleepy - he's had a rough night, and producer Mark Herbert has admitted that doing the Dublin and Glasgow film festivals back to back has involved a lot of drinking. Having a bad hair day, Stephen insists on keeping his hat on, but he's happy enough to be photographed and to answer a few questions. I start by asking him how he came to be involved with this project.

"I read in a magazine that Shane [Meadows] was making a film about skinheads, so I phoned my agent and said 'look, I'd love to be in it', and it just sort of went from there. I bumped into Paddy Considine as well, on a train, and he and Shane were talking about who he could find to play the part. A couple of days later Shane called my agent and asked to see me. I was very nervous. I went and met him first for a bit of dinner. I read a 60-page synopsis of the story and I chatted with him and it went from there."

The story is based roughly on Shane's own life; does it relate much to Stephen's own experiences of the Eighties?

"Sure, yeah." he says. "I mean, not as gruesome as that. I mean, when I was a kid there were skins and mods and all that kind of thing, and that kind of racism as well. I'm mixed race, you see - my Grandad was Jamaican, my Dad's mixed race, so to me it was very difficult to play that part. I had to go for it totally and just absorb myself in it. Especially that scene - the scene with Milky, with the beating, the whole build-up to that... I didn't want to tell Shane that I was mixed race at first, just in case I didn't get the part, you know what I mean?

I phoned my dad and said 'Should I tell him?' and at first he said 'No, don't tell him'; but I had to, because I felt that that was important and we could use some of that to build the character. So that stuff with Milky where Milky's telling him about his family, it's like the life that he could have had. We created this whole back story. It's the way Shane works. You develop the character so much and you do so much background, you've got your own biography. His process is improvising so you need to have that solid character in order to let it move organically."

Is this background the reason why Stephen's character, Combo, forms such a strong relationship with the film's young hero?

""Yes, definitely. He sees something of himself there - see, that's the sadness of it. In this kid he sees this little bit of light that he had himself, which got put out in the end. He's a product of society. He doesn't know how to express himself - he tries, but he doesn't know. He tries to give the kid something.. It's basically all about a boy who's looking for a dad and forming that sense of self, like a right of passage."

Combo really loses it on a couple of occasions during the film - how much does Stephen see him as being in control of his own actions?

Stephen pauses to think. "That one in the car when he grabs Pukey, that's just an instant kind of thing," he concludes. "The one with Milky, that's more thought out. He gets pushed to that extent. He's a volatile character."

So did he find himself getting close to young Thomas Turgoose during the making of the film? What did he think of him?

He grins. "Ah, he's fantastic; he's a lovely lad. Really lovely kid. It's a bit of a cliché but, especially with this film, more than any other film I've ever done, you become a close family for the duration of filming; but with this it's continued and we're all still very close... In a sense, Thomas' life story after that became parallel to the film. His mother died just after we finished filming [the film is dedicated to her].

"He hadn't seen his dad for seven years and when his mum died he restarted his relationship with his dad. Throughout the film he changed so much and he came on so much, he really grew up. When he first started he was only going to school one afternoon a week. He was expelled from different schools and he was going one afternoon a week to a special unit. Now he's going his GCSEs."

Given the film's focus on young people, how does Stephen feel about it getting an 18 certificate?

"I don't understand it." he sighs. "When the likes of Lord Of The Rings can get a 12, when you've got these monsters chopping each other up; and James Bond, I mean, that's violent, isn't it? I know it's possibly because of the content - because of one specific word.

"I think it's a real shame because while we were doing the film there was an incident in Liverpool where there were two black lads [Anthony Walker and Marcus Binns], one with his cousin and his girlfriend, who was a white girl, just standing at the bus stop waiting to go home, and two white lads walked past and started giving him abuse and stuff, and they followed him into a park and killed him with an axe. Just put the axe in his head and killed him stone dead. I don't want to sound all self-important and say it would have changed that, but, you know, maybe if they'd watched the film it might have had just a little bit of an impact where they could have seen that violence happen. Maybe one of them would have just hesitated after seeing that violence acted out."

It's a familiar subject; Stephen had his own experiences with violence shortly after the release of Snatch.

"I was out with my Dad and my girlfriend." he recounts "Some jealous lads came over and started with 'Who do you think you are?'; but it was left then and I thought it was all forgotten about. Then we came out into the car park and there were nine lads there and they just beat us up. When you play a character like Combo you have to relate to what's in him, but I can't really comprehend it, that sort of thing."

More recently, Stephen made an appearance in Gangs Of New York. How does he feel about the difference between working on small British films and Hollywood blockbusters, and what are his plans for the future?

"At the minute I'm doing another Hollywood film with Helen Mirren and Jim Broadbent, called Inkheart. It's totally different because in that you get big Winnebagos, and with Shane there was six of us in a caravan. It's all real film-making. The cast on this is lovely - everyone's really nice; but you feel like you're part of a little personal mission when you do something like Shane's films... Luckily I'm fortunate enough to be able to do different things. When I finish this film, Shane said he'd like to put me and Paddy [Considine] together and see how that would work."

For more information about the film, visit the official site