Another zombie movie, another gimmick. This time it’s an odd one. After each ferocious attack, the aggressive individuals fall into a fugue state for 32 seconds, potentially giving their prey time to slip past them and run away. This allows for some interesting tactical moves, but is it enough to support a full length feature narrative?

Fortunately, there is a bit more going on in this Argentinean-Uruguayan co-production, which has been a big hit on home soil, and although the story is still slight, it’s well played. it’s centred on Iris (Paula Silva), a security guard who works the night shift in a spacious leisure centre in the heart of Montevideo. She’s separated from her husband, though it’s clear that they still have strong feelings for each other; it gradually emerges that their relationship has broken down in the wake of a tragedy and she has coped by withdrawing emotionally, leaving him to raise their daughter, Tata. Unable to do everything by himself, he is trying to push her to take on more parental responsibility, and tonight is supposed to be her night. Taking Tata to work with her, she leaves he to play in the gym whilst she patrols. It seems safe enough. How was she to know that this would be the night of a zombie apocalypse?

To be clear, these aren’t zombies as we most commonly see them these days. They’re victims of an infection whose route of transmission is not clear, and as far as we can tell, they’re still alive. They don’t appear to be interested in cannibalism but are possessed by a murderous rage, which they will take out on any available living target, human or otherwise. Co-writer/director Gustavo Hernández has the sense not to overdo it in the first half of the film, understanding that one person behaving like this is scary enough. Iris has clearly had the kind of training which centres on staying safe and reporting intruders to the police, but when the police are too overwhelmed to respond and her daughter is in peril, she has to find the courage to do things differently.

Though there are a few other complications in the plot, including yet another take on a zombie giving birth, a trope we see with peculiar frequency and which never seems to contribute anything beyond gore, it’s Iris’ psychological journey which gives the film weight. Her troubled relationship with her daughter speaks to a deeper loss of confidence, but she’s smart and observant and this might be the shock she needs to get everything back in perspective. Silva brings an unusual level of sensitivity to an action role, and there’s a twist at the end which points to something beyond over-familiar narratives of redemption through self-sacrifice.

From a horror perspective, the film does well with building up tension and communicating distress, but may disappoint gore fans, being lighter on blood than most of its ilk and lacking inventive means of dispatch. Because it doesn’t position Iris as a fighter, scenes of her sneaking around trying to avoid an unknown number of foes are scarier than usual. There are a couple of visually striking scenes, one set underwater and another using flares to create a blanket of smoke, which will linger in your memory even though less happens in them than you might expect. The ending hints at a more prosaic future; it would be a shame for a sequel to let down the good work done here. Virus: 32 is hardly revolutionary but it’s a more distinctive film than its premise suggests. 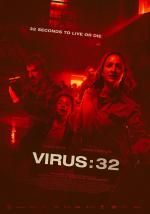 A troubled young woman strives to protect her daughter during a zombie apocalypse with one strange detail: after each attack, the infected pause for 32 seconds before becoming active again.