Jean-Jacques Annaud ventured once before into Bambi territory with his 1988 feature The Bear, a weepy animal-interest flick about an orphaned cub. This time round, the Canadian Rockies have been swapped for colonial South-East Asia, where native villages at the fringes of a jungle are host to a number of Europeans, including Aidan MacRory (Guy Pearce), plunderer of antiquities and hunter of fierce animals. The brothers in question are two tiger cubs growing up cute and carefree in the jungle, oblivious to human activity. Their days are spent chasing raccoons, climbing trees, all the usual baby big cat stuff, until one of their parents is killed.

The twins are separated and both end up in human captivity, one as a reluctant circus attraction, failing miserably to live up to his billing as a fearsome feline - he's more Bagpuss than Sher Khan. The other ends up in the local French Administrator's household, as an oversized pet for his little boy (young Freddie Highmore, whose petulant put-on French accent makes him far less endearing than the cub). This tiger's not as docile as his brother, though, and, as he grows in size and temper, becomes cause for concern and is promptly shipped off to His Excellency (a native Chief)'s menagerie.

All the while, MacRory's involvement with the colonial community means he's kept track of the tigers. So it causes him some consternation to find out that there's to be a contest between His Excellency's new pet, and - surprise, surprise! - his circus sibling.

By this time, the cliches are piling up, from romping Disney-animal moments to Oriental stereotypes - the haggling, toothless village chief, who's out to cheat the white man; his attractive daughter, who offers a glimmer of romantic interest for MacRory, but squats whilst talking to him, so is ultimately out of bounds. From the point the brothers are reunited in the fighting ring, however, all hope is lost. It's so predictable, you can practically guess frame for frame what's going to happen.

Although the makers reassure us that "no tigers were harmed in the making of this film", I couldn't help feeling that it is an affront to one of the most beautiful, mysterious and beguiling animals to involve so many in such a trite and unimaginative exercise.

The film is worth watching for the footage of the animals, but they'd be fascinating in whatever circumstances, and good nature photography doesn't, in this case, make up for cringeful storytelling. 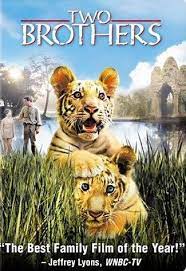