Tribeca's opening night film is a tribute to homegrown hip hop success story Nas (that's Nasir bin Olu Dara Jones, to his mum). Time Is Illmatic looks back at his career 20 years on from the album that brought him global fame.

The result, directed by graffiti artist and first-time director One9 is less an ordered history of facts than an emotional snapshot of the artist's childhood and thoughts about where he is today, broadened out considerably by his younger brother Jabari - aka Jungle - who proves to be even more insightful about the neighbourhood and pitfalls of the Queensbridge Projects where the pair grew up, than his elder brother.

I admit, I'm no expert on the music as the bulk of the hip hop movement passed me by but those with even the most passing knowledge of it will recognise the superiority of the lyrics represented here. Nas's poetry is much more far-reaching than much of the fare at the time, marrying creativity with the crack-based and cracked reality for many who lived around him as a child. "Any and everybody made money of crack...it was survival to the fullest."

The film begins at the beginning, outlining Nas's childhood as the son of jazz musician Olu Dara and Ann Jones. Although his mum is now dead, his dad offers contributions about his son's addiction to music from an early age. Nas describes his high school as being "like Rikers", which is why his dad encouraged both he and his brother to drop out and make something of themselves.

One9 isn't interested in creating a hagiography of Nas and thankfully doesn't rely too much on the talking heads format, preferring to root the film in the reality of where Nas took his inspiration - Queensbridge itself. While the lack of background is occasionally frustrating for the uninitiated, and the mixture of film stock - presumably the result of this being a long time in the making - somewhat distracting, the film really hits its stride in terms of social context.

It elegantly shows a clear path between the jazz riffs that were Nas's father's bread and butter through to the inventive beats that back his son's hip hop and there is plenty of footage of Nas doing his thing from his earliest days on up - showcasing the likes of The World Is Yours, Life's A Bitch and One Love.

The director also scores heavily in terms of showing the lack of social mobility in the New York of the period. He makes good use of archive footage to immerse us in the atmosphere of fear that pervaded this sort of neighbourhood at the time and gives a sense of the camaraderie and rivalry that grew up between the kids simply trying to make it out alive - as evidenced by the death of Nas's best friend William "Ill Will" Graham and the shooting of his brother. As Jungle looks at a photo taken at the time of Illmatic's recording in 1994 and outlines the stories of the others in it - almost all of whom (even the children) are now either dead or in jail, it brings home without anyone needing to spray it on the wall, how impressive Nas's success is and goes a long way to explaining why he seems pretty humble in terms of acknowledging it. 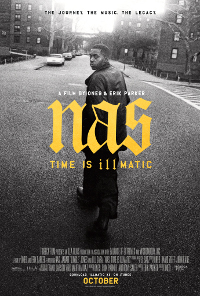