Although it's very different in tone, there's a Hot Fuzz quality to Hong-jin Na's supernatural horror tale The Wailing. A small village in the middle of nowhere. Befuddled local police. A sergeant, Jong-gu (Do Won Kwak), endearingly reminiscent of Nick Frost's Danny Butterman. Take that pastoral scenario and add a spate of brutal murders in which people who have slaughtered their family members turn out to be suffering from a mysterious, gruesome infection, add superstition and local fears about a foreigner thought to be up to no good, and Jong-gu is really out of his depth.

The said foreigner is a Japanese man (played by veteran actor Jun Kunimura) whom some of the villagers claim is a ghost in human form. Prejudice against Japanese people in Korea is fairly commonplace and ought to make Jong-gu cautious, but he's also having strange dreams that seem to relate to this man, so he investigates - without waiting for the clearance he'd need to use anything he found in evidence - and doesn't like what he sees. He likes it even less when his young daughter Hyo-jin (standout Hwan-hee Kim) reveals that she has been associating with him, and contracts the same disease that is killing the villagers. What follows involves recourse to a shaman (the superbly ambiguous Jung-min Hwang) and an encounter with a strange woman who may or may not be a ghost herself. As things spiral further and further out of control, he - and the audience - lose all hope of unravelling what's going on. All he can focus on is the need to save his child.

To say that Na's film is bewildering is an understatement, but the confusion may be intentional. There is less concern here with logic than with mood, and each of the characters has a consistent arc amid the chaos of the wider story. The supernatural forces which become increasingly dominant in Jong-gu's life have their own inscrutable patterns of reason. Both the policeman's mounting terror and his feelings of helplessness are consistent with what most parents feel when their children are afflicted by disease. The exorcism at the centre of the film is a cacophony of sound and whirling images, given humanity by Hyo-jin's frantic cries, which are in a whole different league from the histrionics of Linda Blair.

Throughout, the film is brilliantly edited. Na draws on Korean, Japanese and Catholic beliefs in both plot and imagery, as well as drawing on the natural world to create some of the film's most striking scenes. There's a sense of wild, unrestrained natural forces unsettling a civilised presence that was always fragile out in the hills, far from the sophistication of the cities, like a nightmare emerging from Korea's deep past to challenge its modern perspectives.

Part of what makes the film so unsettling is its shifting in tone. It opens with amiable, bumbling comedy which gradually grows darker until at the end, if you're still laughing, you'll likely feel ugly for it. Jong-gu's clumsiness is sometimes sweet, sometimes frustrating, but importantly it lures the viewer into the belief that this is somebody it's safe to be close to. Some of the jokes don't translate well, as when Jong-gu launches a tirade of swearing at the Japanese stranger and his translator offers a much shorter version - this isn't just a matter of diplomacy but an observation of difference, as equivalent terms don't really exist in Japanese. The scene points up Jong-gu's helplessness as he shifts his allegiance between people whose motives he can't hope to comprehend.

Overall, The Wailing is a deeply flawed but nonetheless compelling film which will cement Na's reputation as a force to be reckoned with even in a country that consistently punches above its weight. 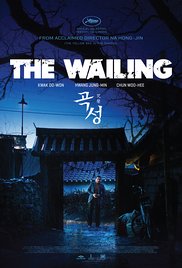 When a stranger arrives in a village, a sickness begins to spread.