A chilly landscape. An isolated house. A successful musician trying to get away from the world to focus on her music. There are echoes of Amelia Moses’ Bloodthirsty in this haunting fable from Ryan Glover, but it’s a pared down and altogether more wayward film in which the supernatural element – if indeed there is one – takes the most slender of forms, merely a shadow shifting on the boundaries of its heroine’s consciousness.

That heroine is Catherine, played by up-and coming musician Teagan Johnston, whose distinctive style and considerable force of character seem already to mark her out as something special, and once won her a show at David Lynch’s Paris nightclub, Silencio. Johnston wrote the music for the film herself and although she wasn’t involved in the development of the script, this would have been a very different beast without her. She gives a powerful performance, shifting gears with an ease one would not expect in a first acting role. Catherine is sometimes disarmingly ordinary, sometimes so immersed in a journey into darkness that one rides along with her, barely noticing how far off kilter her relationship with the film’s wider reality has become.

Glover’s background is in cinematography and this, alongside Johnston’s work, is the driving force in the film. As a consequence it’s big on atmosphere even though very little actually happens by way of plot. in her remote hideaway, Catherine is joined by a photographer (Jenna Schaefer), there to take some pictures of her. Together they visit an assortment of moody locations which includes an abandoned house with a troubling history, and it is here – whichever way you interpret the film – that things start to go wrong, though you might not see it straight away. The two subsequently commence an affair and feed one another’s obsessions, Catherine’s creative impulses connecting to an interest in physics. String theory collides with paranoia and ideas about puppetry. What shapes our reality? Is somebody pulling the strings?

Rough at the edges, emotionally raw, this is more of a poem than a conventional narrative film. It’s a must-see for Johnston’s fans and will no doubt acquire cult status in years to come. Though some horror fans will feel frustrated by its unrepentant artiness, it packs a punch, and nobody who watches it will find it easy to forget. 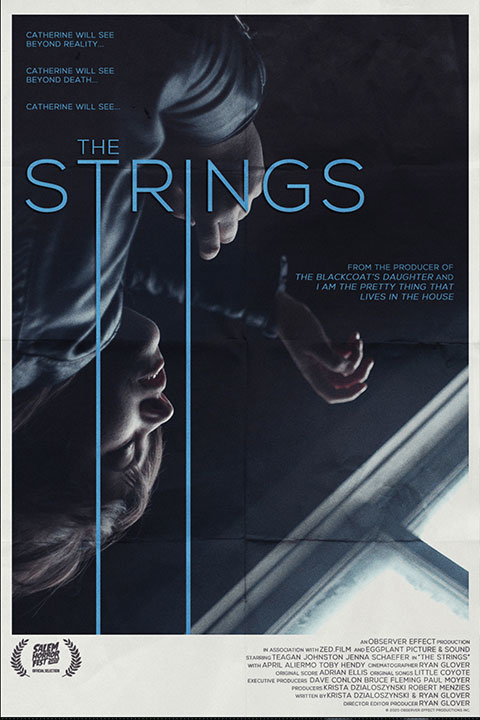 In the dead of winter, a musician travels to a remote cottage to work on new material, but soon finds herself under attack from a mysterious dark presence.