This is Frank Miller's directorial debut, a sort of superhero movie from someone who is famous for something comics related. The trailer describes him as the creator of 300 and Sin City but he is most famous for his work with other people's characters.

The Spirit was created by Will Eisner, whom you may never have heard of. It's hard to illustrate how important he was to the development of the modern comics industry, how critically acclaimed his work was; suffice to say that the comics equivalent of the Oscars are called The Eisner Awards. The character was created in the 1940s, variously resurrected, now available in reprints stretching to 26 volumes and counting. It ran as a newspaper serial and ran the gamut of genres from noir to comedy to action adventure.

So, with all that to choose from, we've got Miller's retelling, which feels incomplete, inchoate, incompetent. It's easy to mock Miller, he's got his obsessions: pretty girls, prostitutes, private eyes and other affectations of noir. His masterwork is The Dark Knight Returns, which asked what would happen if Batman got old. 300 bears a lot of his influence, though the importance of Lynn Varley's colour work cannot be underestimated. At the very least having someone else involved in the creative process kept Miller on a leash. Unrestrained, he is given to excess, many talents are: Adam Sandler springs to mind, intolerable in much, sublime in Punch Drunk Love; Robin Williams; Steve Martin. Comics often flourish best within constraints - as GK Chesterton put it, "Art consists of limitation".

The Spirit is limitations writ large. Miller's old habits die hard. There are no prostitutes, thankfully, but there are beautiful jewel thieves, bad guys who are paedophiles, an inexplicable plastic dinosaur on a beach, Samuel L Jackson dressed as a Nazi, the dad from The Wonder Years as a Police Commissioner. What there isn't is a satisfying origin story. We know how the Spirit came to be the immortal crime fighter that he is, but not why he's got a fondness for cats, nor why he refers to the City as his; we see him romancing any number of women but there's never a clear reason for his romance with Central City.

The City is a mess, part CGI, occasional skyline shots that are dissonant in their realism, like the transition from film to video in old TV shows. Unlike the studied art-deco restyling of technology of Batman: The Animated Series, The Spirit has Ford Tri-Motor aeroplanes and Desert Eagle pistols, recognisably so; the police drive 1950s Plymouth Belvederes and fly AH-64 attack helicopters. You could say it's as if Frank Miller threw in everything but the kitchen sink, but there is a point where a kitchen sink is thrown.

Then there are the compromises of modern filmmaking. There's sequel potential, inevitably, but a high point is the presence of the BVLGARI brand in the heads-up display of an overly-accoutred rifle. Nokia phones turn up, inevitably. Where Eisner's newspaper Spirit put the credits on the sides of buildings by drawing them into advertisements, leaflets in the wind. Here they are superimposed with CGI, which somehow feels wrong; they could have been physically integrated and then shot, but then there aren't any real sets here. Almost every scene seems to have been shot in front of a green screen. This is the same sort of freedom that promised so much and gave us The Phantom Menace. These are actors as props.

Oh! What actors, though. Scarlett Johanssen is Silken Floss, a character who was an atomic scientist originally, here a PhD student with a neat line in cloned goons. Eva Mendes is Sand Saref, and she's no stranger to painful comic book adaptations after her time in Ghost Rider. Gabriel Macht is relatively charming as the eponymous Spirit, but his voiceover calls to mind the horrific initial cut of Blade Runner. He's had a number of significant roles before, including Gram Parsons in Grand Theft Parsons, but this was to be his breakthrough film. There's not too much of him here, though - he's buried under artifice.

Then there's Samuel L Jackson, who is clearly having fun being the villain, but one imagines being paid millions of dollars to dress up and shout nonsense as a guy called The Octopus is part of that. There's an homage to Pulp Fiction in there, a scene where you can see the spirit gum holding on his sideburns, a moment where he rants and raves in a black and white and red room that feels like a Virgin Media advert. At one point we hear him shout about not liking "egg on his face", and then we see Louis Lombardi as a goon called Huevos.

The cloned goons all have names ending in '-os', which might be a 300 reference. As it stands, Huevos doesn't end up splattered on The Octopus' face, he just stands beside a guy called Rancheros. There are also painfully laboured references to Robin from Batman, though sadly not as "the boy hostage", and Elektra, a character that Miller created when he rejuvenated the Daredevil franchise before Ben Affleck killed it. There's a van in the livery of Ditko's Speedy Delivery, Steve Ditko being the co-creator of Spider-Man. Thor (another Marvel comics character when he's not being in mythology) and Star Trek get mentioned too. It doesn't feel big or clever, it's just a little bit sad. Miller has written dialogue that makes it seem like he hasn't been in a conversation. There is acting talent here, This is a film that is trying desperately to be liked, and it fails.

It's hard to say why, exactly, but it might be photocopying. There's a scene where Eva Mendes 'signs' a crime scene by leaving a printout of her derriere, and while it's pretty it's senseless. Originality is subsumed by repetition. High piles of homage and tribute obscure anything new until all that is left are artifacts of the process, dirt on the glass replicated again and again. It feels like focus groups and marketing have had their way with this film, that it's been tailored for some obscure market segment that you might not want to be a part of. A case in point; the end credits have Christina Aguilera singing Falling In Love Again, a song more closely associated with Marlene Dietrich.

As an interpretation of someone else's creation, a Miller speciality, this disappoints. Nothing new is added, for a start because there isn't the same familiarity you'd have with Batman or Ancient Greece, but also, one assumes, because of the respect Eisner's work engenders. Then there's the liberties it takes; for what amounts to a re-interpretation of an original this is true to neither the letter nor the spirit. 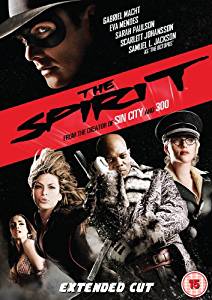