Depressing, uplifting, charming and dark, this neo-realistic film, set on a small Sicilian island, leaves a sense of the claustrophobia caused by poverty, albeit in a setting of delicate beauty.

The village is old, stark, with narrow streets and honey-coloured stone. Fishing and boats and nets abound. There is little cheer except for the constantly happy Teresa (Veronica Guarrasi), smiling and innocent and good at telling small lies. Her teenage brother Turi (Ignacio Ernandes) broods, unhappy with his destiny.

Everyone works, even the children running errands, Teresa for her grandmother (Anna Ernandes), now widowed. Everyone does as they are told and there is no room for selfish ambition, nor dreams of escape.

The backdrop of the sea is all pervading. We have glimpses into the minutiae of such a life: the constant mending and spreading of the nets, the skill of the fishermen, throwing them out, bringing in the catch, the tuna flashing closer to the surface, their sharp black bodies darting and racing, as the huge net rises and the men, circled in their boats, draw it up little by little and then the stabbing of hooks and the sea turning red. The strength and rhythm and rawness leaves you breathless and afraid.

To be private, pursue dreams, be alone with a girl, or a boy, requires dexterity and deception.

"What is the matter with you," asks Turi's father (Marcello Mazzarella), fed up with his son's lack of grit and cheerfulness. Grandmother is strong, but has bad eyes. Her husband drowned, saving Teresa. In the quarry, they prepare a sculpted stone of him to take to sea. It is the custom.

This is a film, set in contemporary Italy, where the poverty and way of life gives it a timeless quality. Nothing happens, but life is not nothing. It is all consuming. And we are allowed to become a part of it for a while. 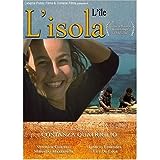 Simple things mean a lot to the children of fishermen on a Sicilian island.