One of the greatest myths about wars is that they end and then people are at peace. At the end of the Second World War, over 50 million people were displaced. over 100 million permanently physically disabled, and over two million women were dealing with the after effects of rape. Many of the latter faced the additional challenge of being rejected by their communities and finding themselves destitute. In Poland, a raid on a convent by a Russian battalion left a group of nuns in a desperate situation, and it was only the efforts of a young French doctor, Madeleine Jeanne Marie Pauliac, that gave them any hope of survival. In this film, Anne Fontaine presents a fictionalised version of their story.

Here, Mathilde (Lou de Laâge) is the doctor persuaded to leave her busy clinic - not short on other crises to deal with - and follow a young nun who barely speaks her language up into the hills to the stone walled convent. There, she aids a young woman who, the nuns claim, they have taken in out of charity, but it soon becomes apparent that there is something bigger going on. What follows is an ostensibly straightforward chronicle of her attempts to help, with much deeper subtexts.

Why does Mathilde, a no-nonsense woman with a Jewish lover (Vincent Macaigne) and limited regard for authority, risk her career and her personal safety to help the nuns? It's not due to some compulsion for heroics - there are plenty of opportunities for that elsewhere. Some of the nuns - particularly the Abbess (Agata Kulesza) - go out of their way to make her feel unwelcome, Over time, however, these very different women discover the small but vital things they have in common and warm to each other in a way that goes beyond any sense of necessity or observation. Fontaine's quiet, observational style finds delight in these small things, and the bleakness of wider circumstances emphasises the importance of that.

It's difficult, from a modern Western perspective, to get inside the heads of women whose reaction to being raped is to feel such intense shame and guilt that they are not only willing to die for their secret but actively urge one another to take the same risk. Wisely, writer Pascal Bonitzer shows us that this is about more than religious belief or a cultural sense of submissiveness. The nuns' predicament is explained in very practical terms. If any word of what has happened reaches the wider world, their convent will be shut down; they will be treated with hostility by the local population. Their lives are on the line. Though it's understated, we see clearly the emotional trauma that they continue to experience, and the nature of faith is explored as they struggle with the awareness that they have no way to defend themselves from any future attack. Meanwhile, the Abbess is faced with terrible decisions as she balances the value of corporeal and eternal lives.

With a timely release in a year when Poland is considering outlawing abortion even in cases of rape, The Innocents may well be a historical film but it still has plenty of relevance today. Caroline Champetier's lucid cinematography creates a visual counterpart for the quietness of the convent and Annette Dutertre's delicate editing keeps us alert to the ever-present sense of danger experienced by the women without ever taking us to far from what's happening in the present, or from the weight of the unknown future. The whole is a poignant yet powerful film made with sensitivity and poise. 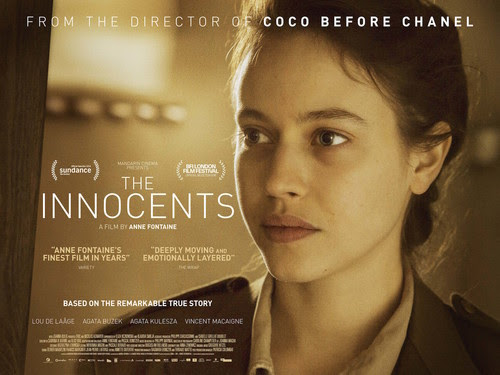 A young doctor becomes the soul hope for traumatised nuns.