Debt. Austerity. Longer hours or you lose your job. Lower pay because everyone has to do their bit. Can't make ends meet? All you can do is turn to your friends.

This isn't 2013; it's 1926. In the Happy Lands, everyone is a friend. This is a tight knit mining community, families bound to each other both by love and by shared experience of tragedy. Mining is dangerous work. To make things worse, many of the town's menfolk were killed in the recent Great War. There they were fighting for the interests of others. Now, faced with a difficult life getting even harder, they are ready to fight for their own, to join the General Strike.

At its height, nearly two million people participated in the strike. Although they were faced with an uphill struggle, the recent revolution in Russia meant that they had real hope that things could change - that they could gain real control over their destiny. Of course, the establishment had the same thing on its mind, so the response was ruthless. Families faced violence as well as deprivation. By concentrating on the struggles of just a few families in this small community, The Happy Lands brings historic events to life and makes it easier to get inside the heads of those involved.

It's difficult to pull off this kind of film in a way that works on the big screen, especially with a small budget. The Happy Lands would work better on television but it is still, in many ways, a strong piece of work. Made in co-operation with members of that same community, it has a strong claim to authenticity, and some attempt is made at balance with not everybody on the establisment side portrayed as a monster. Though the taking heads detract somewhat from the emotive impact of the docudrama format, they help to fit it into a modern context. The main problems are technical. Poor lighting in some scenes gives it an artificial, stagey look, and this is echoed by the direction - too often characters seem posed rather than moving around naturally. In combination with the impassioned speeches necessary to the story, this can make it feel like a lecture.

On the plus side, the quality of acting from a largely amateur cast is impressive and the film certainly has its moments. Sharp editing that intercuts scenes of a nightclub comedian with scenes of a fight creates an effective reminder of the gulf in experiences between the comfortably off and the working class. A South African character provides a broader perspective on the miners' struggle and injects a note of humour as he points out that everybody leaving the coalface has black skin. This also reminds us of the interplay of prejudices, as even the children of the miners become dehumanised in the eyes of outsiders.

Timely and with plenty to say that is still relevant, The Happy Lands is both a cautionary tale and a celebration of the human spirit. It's an important reminder of a period of history too often forgotten. Through it all, the miners' slogan rings clear: "Not a penny off the pay, not a minute on the day!" 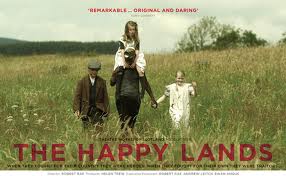 The Big Melt
Pablo's Winter
The Spirit Of '45