The Happiest Day In The Life Of Olli Mäki

If you think about black and white film stock and boxing only one movie is likely to spring to mind, but while the trajectory of Martin Scorsese's Raging Bull is towards the canvas, Juho Kuosmanen's debut feature The Happiest Day In The Life Of Olli Mäki - shot in textured monochrome 16mm - has a gently humanistic and upbeat sweep.

Driven as much by events outside the ring as within it, Kuosmanen, writing with Mikko Myllylahti, considers the real life of the Finnish boxer (Jarkko Lahti) in the build up to his first professional bout after a string of amateur successes. Far from being a bruiser in his off hours, Mäki - who is known as the Baker of Kokkola - is a gentle, slightly pensive soul, the sort who, when told by his manager Elis Ask (Eero Milonoff) to "look cruel", breaks into a wry grin.

We meet him in the first flush of a relationship with local lass Raija (Oona Airola) in their village on the day of a wedding. The pair's youthul energy is immediately apparent as on discovering his car won't start, Raija perches on the front of his bike and they cycle to the venue. This sense of carefree, spontaneous momentum runs in tandem through the film alongside the more formalised precision of the boxing training, so that the grind of the drill is balanced by scenes including Olli running with a newly found kite through woodland or engaging in the water fight larks of the changing room.

Mäki has to go to Helsinki to train and, initially Raija comes with him - the pair of them comically housed in bunk beds in Ask's children's bedroom - but pressures soon start to build, not least because Ask, once a lightweight European champion himself, insists on Mäki dropping to featherweight.

Character chemistry is everywhere, from the testosterone-charged unease between Mäki and Ask, part-bromance, part-bully/victim to the sparkle of easygoing understanding that passes in every glance between the boxer and Raija. When Raija leaves Mäki's side, we feel the cosy glow dissipate with her, the screenplay suddenly harder, less forgiving. Kuosmanen doesn't do this by hitting us on the nose with sentimentalism but by showing the warmth of their relationship in relief against the other elements of Mäki's life. This is particularly effective in a scene where the boxer returns to a fairground attraction only to be confronted with a despair that Raija's presence had previously rendered invisible - we don't even know the character involved by name and yet it is immediately and stingingly affecting.

Kuosmanen never takes the expected route, even as his film builds to a traditional climactic fight against American Davey Moore (John Bosco Jr). Instead, he constantly shifts perspective, asking us to view the situation from a different angle - and another place of emotional truth. A place where happiness is something found in unexpected places and amounts to more than a simple, fleeting moment of triumph. 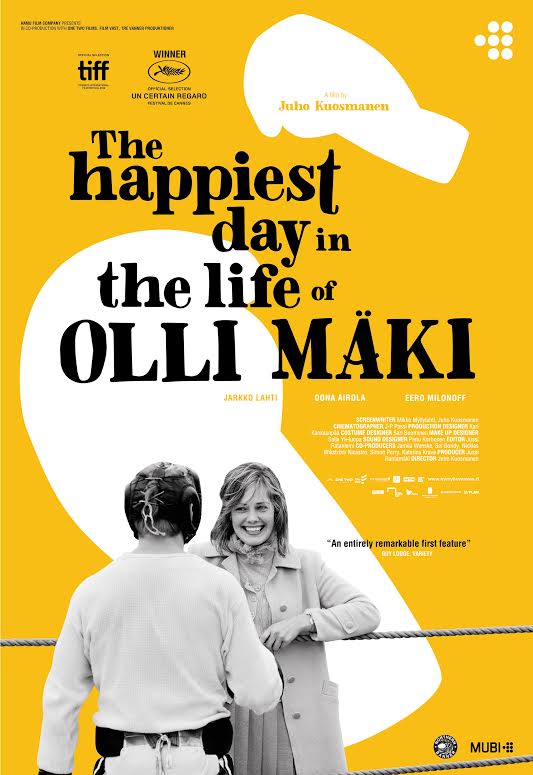 Finland, 1962. Boxer Olli Mäki is 26 years old and in love. Expected to win a bout against an American, but he would rather be with his girlfriend than train.

A postcard from Karlovy Vary