The sort of book you were made to read at school but never really appreciated, F Scott Fitzgerald's The Great Gatsby is one of the great American novels. However, with two unsuccessful movie attempts - a silent version in 26 and then a second effort in 49 - prior to this that doesn't necessarily mean it translates well to screen.

As for this third attempt, despite being scripted by Francis Ford Coppola (yes, the man behind both The Godfather trilogy and Apocalypse Now), director Jack Clayton still can't capture the novel's magic.

It's the 1920s and struggling bond salesman Nick Carraway (Sam Waterston) has just moved to Long Island. Before long, he becomes intrigued by his super-wealthy neighbour Jay Gatsby (Robert Redford), who hosts lavish parties each night and is shrouded in mystery. Then one day Gastby asks to meet Nick's married cousin Daisy (Mia Farrow), who it seems he used to know.

In all honesty, Clayton's take isn't awful, it's just not particularly brilliant. At times it’s a rather effective comparison of one’s self-delusional visions, illustrated by Gatsby’s determination that you can repeat the past, and the harsh realities behind them. The problem is, it's also hard to see who it will appeal to. On the one hand, modern audiences probably won't even last five minutes, while on the other, fans of the 1925 book will likely complain that it doesn't capture the multilayered themes and double-meaning symbols so crucial to the source material.

You can't really fault Clayton and Coppola for their loyalty to Fitzgerald, given that the narrative strains to cram in as much as it can plot-wise. Sadly, the relentlessly-faithful approach gives us a movie which isn't just long at two and a half hours, but that feels long as well. As for 'roaring' 1920s setting, while the jazz-age period is all about fun and parties, it seems pretty depressing.

On a positive note, Redford is perfectly-cast as the rich and enigmatic Gatsby, mixing good looks with natural charm and that Redford quality which suggests he's hiding something - ideal for the 'shadowy past'. Likewise, Waterston is well-picked as the narrator and is one of the few actors who fits in the era. Despite the fact he's essentially a cipher we learn little about, he proves a useful entry for the audience. While underdeveloped, it's his friendship with Gatsby that is the most interesting dynamic of the movie.

Shame the same can't be said about the romance with Daisy. Mia Farrow fails to make us understand what Gatsby sees in her. Still, it's not just Farrow at fault, the majority of the cast seem as though they're reading lines from a book and struggling to make the dialogue appear real.

Not terrible, but only worth watching for those who like the book or Redford. 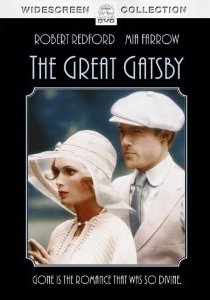 A struggling salesman moves to Long Island and becomes intrigued by his wealthy neighbour.