The Girl Who Knew Too Much

The film that launched the giallo genre, The Girl Who Knew Too Much is a work whose importance is difficult to overstate. It's also gorgeous to look at, with Bava's characteristic lush photography pairing noir shadows with brilliant sunlit scenes, taking full advantage of the beauty of Rome. Originally conceived as a romantic comedy, it retains many of the period traits of that genre, a characteristic that adds depth to its twisting plot as well as supporting a rich vein of black humour.

Letícia Román is Nora, a young woman with a love of mystery novels who visits Rome to tend to an elderly relative, only to find herself witnessing a murder - or so it would seem. With the aid of a smitten (and rather pushy) doctor, she sets out to investigate. The worrying thing is, if this is the serial killer it seems to be, there have been three victims so far, killed in alphabetical order. Nora's second name begins with a D. "D for death,"" as a mysterious caller tells her.

Nothing here is quite as it seems. With smuggled marijuana floating around and our heroine suffering three head injuries in the first ten minutes, it's possible she could have been hallucinating, and the authorities certainly seem to think so. She has a vivid imagination, which she puts to good use, defending her apartment in ingenious ways - even if they don't work put quite as intended. Yet between the comedy elements Bava plays it remarkably straight, demonstrating his mastery of tension in a manner that has often invited comparisons to Hitchcock. The sometimes far fetched nature of the story (especially when it comes to character motivation) does nothing to mitigate the tension.

Added to the mix is excellent set design and costuming that would set the tone for many films to follow (indeed, Bava himself reprised a sequence from this film later the same year in Black Sabbath). The acting may be melodramatic and the dialogue (in both Italian and English) rather OTT, but from a technical perspective the production is flawless. The subversive narrative, constantly challenging audience expectations, was hugely influential in its time and still makes the film a lot of fun today.

This is a film that exists in two versions. The US cut, known as The Evil Eye, is lighter on the drug use and heavier on the romance, so the tone of the two is quite different. It also includes a voyeuristic in-joke not seen in the Italian version. Completists will want to see both, and either will give you a great deal of pleasure. 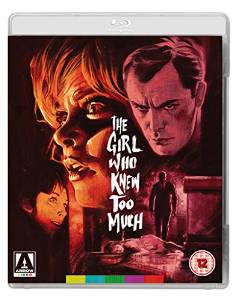 A young women who loves crime novels thinks she may have uncovered a real life murder mystery.