The Fault In Our Stars

In The Fault In Our Stars two teenagers, Hazel (Shailene Woodley) and Gus (Ansel Elgort), meet at a cancer support group and fall in love. Despite Hazel's frailty Gus arranges for them to take a trip from their home in Indianapolis to Amsterdam to meet an author she idolises. Peter Van Houten (Willem Dafoe), the author of An Imperial Affliction, turns out to be something other than what she imagined.

With its subject matter of teen romance, cancer and terminal illness The Fault In Our Stars could have been mawkish and sensationalist. Fortunately it avoids this, mostly, but it is heavy handed. The major offender in this is the voiceover delivered by Hazel. The expounding adds little to your understanding. The actors Woodley and Elgort, plus Laura Dern and Nat Wolff as Hazel's parents Frannie and Isaac, capably portray their characters and provide all the emotional information that you need. While in keeping with the nature of the novel the voice over is clumsy. It needs to be wittier or more conversational, it has to draw the viewer in rather than just tell them what they already know.

At the start of the film Hazel says: "I believe we have a choice in this world about how to tell sad stories. On the one hand, you can sugarcoat it. Nothing is too messed up that can't be fixed with a Peter Gabriel song. I like that version as much as the next girl does. It's just not the truth. This is the truth."

The problem is that it's not just sugar coated, it's frosted and sprinkled. Thankfully there are no Peter Gabriel songs. The debilitating effects of illness are only addressed when they advance the plot. The isolating effects of chronic illness in teenagers are ignored. Problems with body image come up once when Gus is worried about Hazel seeing the stump of his amputated leg. Considering the subject matter of teen romance and cancer I would have thought that body image would have played an important part in the film. Weight loss, weight gain, chemotherapy makes you bald, steroids make you puffy and bloated, ceftazidine makes you smell of cats piss, if you knew what tinned sweetcorn smells like you'd never eat it again, Hickman lines just freak people out. Cancer and its treatment messes up how you look, how you smell and how your skin feels, yet every one in the film looks like a fit, well manicured Hollywood actor untouched by the ravages of illness.

Sugar coating aside, the film gets some things right. Some of the harsher humour used by the characters rings true, as does the deprecatory tone that is sometimes directed towards support groups. How illness hurts those around you is brought up but isn't overblown. Hazel and Gus falling in love is saccharine but is acted with an edge of desperation that makes it convincing. The film also gets little things wrong, little things that suggest a lack of familiarity with chronic illness on the part of the filmmakers. When Hazel is in intensive care she still has nail varnish on (which is important to Gus when he sneaks in to see her). Despite her wrecked lungs Hazel pushes Gus in his wheelchair across a grass slope, her oxygen supply in her backpack.

If what you are wanting is a teen romance with a tragic ending then The Fault In Our Stars is more than passable but if you are after something less sweet then maybe you should read the book. 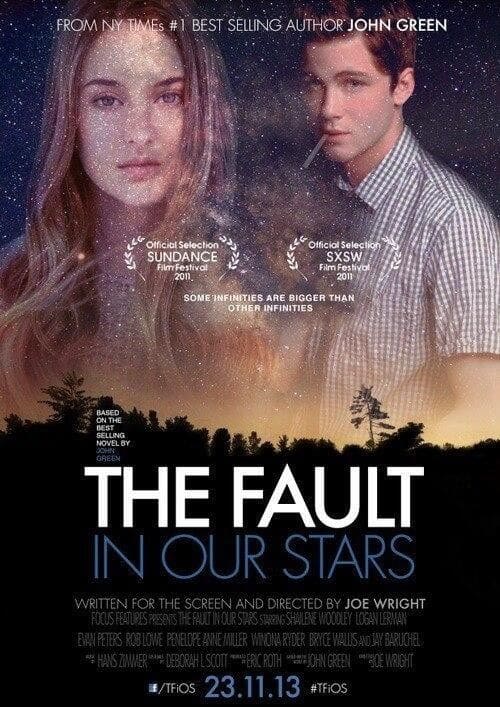 Teenagers who meet through their cancer treatment embark on a journey together.

Writer: Scott Neustadter and Michael H. Weber, based on the book by John Green.

Me And Earl And The Dying Girl