The slick opening scene of The Drop shows the title in action. It refers to the way dirty money is moved around New York, ending its life each night at a random bar, nominated by the mob who will collect the cash. Bullhead Director Michaël R. Roskam - taking charge of his first English language feature - tells us the score quick and fast, showing money slipping from hand to hand and finally into a slot in the back of a Brooklyn bar, ready for collection.

But though the scene is set for a thriller romp, Dennis Lehane - adapting his first screenplay from his short story Animal Rescue - is less interested in crime than those who commit it and the film quickly morphs into a character study with criminal underpinnings set firmly within the blue collar world (this is old school Brooklyn, firmly shorn of hipsters and coffee joints).

The chief character in question is Bob (Tom Hardy), a loveable chunk of barman and a soft-spoken blend-into-the-background sort, who attends mass daily but, ambiguously, never takes communion. He works for his cousin Marv (James Gandolfini), a bitter not-so-wiseguy, who harbours a festering resentment over the fact that Chechen gangs now rule his roost.

Despite the reheated mob shenanigans and an early robbery at Marv's place, the chief drivers here are a puppy in peril - rescued one night by Bob from a dustbin in a move that sees him strike up a relationship with waitress Nadia (Noomi Rapace) - and Bob himself. The plot settles to a gentle simmer at this point and at times threatens to come off the boil completely. But the towering presence of Hardy holds the attention, despite the fact that nothing except some man/dog and man/woman bonding is going on. He may have the beefed up body of a bouncer but Hardy continually emphasises Bob's softer, hesitant side, his body language screaming flight even though he is built to fight. His mystery is key to the pull of the piece, as his history is gradually revealed.

Gandolfini, meanwhile, sinks into Marv, giving his put-upon bar owner an off-kilter mix of deadpan fatalism and an air of veiled threat, a reminder - if we needed it - of what a tremendously versatile actor we lost when he died in 2013. Roskam, for his part, demonstrates excellent screen shorthand, with the sight of an umbrella protruding from the bars of a cage every bit as disturbing as a severed foot wrapped in cling film.

In the final third, the plot begins to kick in as a threat from Nadia's past - her volatile ex Eric (Matthias Schoenaerts) menaces Bob over claims that the pup is his - is matched by clear and present danger caused by the robbery.

The emotional notes remain obviously manipulative, with animals in peril always destined to tug at the heart strings and the role of Nadia feels flimsy by comparison to the men of the piece, more there as a way of causing conflict between Eric and Bob than as a character in her own right. This is not Rapace's fault - her playing a wounded woman credentials are second to none - but her character never moves beyond being, like the pup, a pawn in the game. In the end, it's Bob the barman and the chance to hear his story that keep you at the bar. 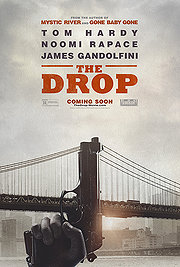 A barman finds himself embroiled in mob trouble after a robbery and facing personal threat after finding a puppy in a dustbin.