Eva's school is involved in a foreign exchange programme. A German student will come to stay with her family for two weeks, during which time they will both attempt to improve their English. She has tried to tell her family about this - mother Etty, father Evert, brothers Erwin and Manuel - but nobody listens to her. Nobody really seems to notice she exists. She's small and hunched, wears dowdy clothing, even sleeps with her glasses on. One night, she makes a wish on a plastic star.

The next day sees the beginning of a process of change that will turn orderly lives upside down.

The mysterious Veit, apparently named for a saint whom it turned out was actually a torturer (Watchmen fans may wonder if there's another reference being made), is the sort of visitor any number of teenagers might wish for - perhaps naively. He's tall, blond, glowing with health, and there doesn't seem to be anything he isn't good at. We've all seen films before in which attractive strangers seduce and destroy, but Veit's ability to torture may stem from the fact that he is a genuinely nice person - at worst a bit smug. He shows Etty, long an unthinking servant to her family's needs, a different way of appoaching life. He inspires Evert to develop a troubling conscience. In Erwin he lights a flame that may destroy his relationship with the woman he was about to move in with. In Manuel, he inspires a furious jealousy. Only for Eva, frustratingly as ever, does nothing seem to be changing.

Meanwhile, a lifetime's worth of secrets and resentments come tumbling out.

Stories like this can easily descend into frantic slapstick, but The Deflowering Of Eva Van End successfully balances farce with character development, making us care about those involved. Its sharp, witty script (the subtitlers have done a great job with the double entendres) provides plenty of laughs but there's also a deeper vein of humour offset by the revelation of loss. We might first feel horror at the destruction of confidence and self image; later, we wonder if a little destruction isn't exactly what these people need.

With astute social commentary interwoven in these personal dramas, this is a film whose cruellest joke is on its title character. It should be Eva's film, yet in all things she seems to be an afterthought. She should be living her life, but she seems to be a footnote in other people's. A wish can only bring her so much. A quiet but forceful performance by Vivian Dierickx gives her dignity in the face of seemingly endless humiliation. She gives force to what is funny here by reminding us of everything about teenage years that is not. 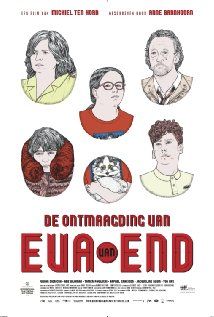