The Cove won the audience award for documentary at 2009's Sundance Film Festival and in many ways it is easy to see why. In terms of camerawork, it is well-made and its thriller elements - which echo the same sort of edge-of-the-seat tension employed so admirably by James Marsh in last year's Man On Wire - are certainly gripping. But scratch the good looking surface and The Cove's contentions start to look very wobbly.

The subject matter is emotive. What's not to love about a dolphin? With their ready smiles and charming mythology/history of human rescue, they're one of the few water-based animals for which no PR is needed. So, the idea of them being slaughtered en masse in the small Japanese fishing village of Taiji, is bound to have Flipper fans in a frenzy.

One such fan is Ric O'Barry. Once a handler of the various Flippers for the TV show of the same name, he turned gamekeeper after one of them "committed suicide in his arms" (yes, he really believes this, and tells us in scenes that are eerily reminiscent of Timothy Treadwell's deluded desire to anthropomorphise his furry bear chums in Grizzly Man). O'Barry now makes it his life's work to try to protect them and the film follows his story as he - and the filmmakers themselves - attempt to shoot footage of the village slaughter in a cove kept hidden from prying eyes.

Although the Mission Impossible style antics - involving everything from hiding cameras in 'rocks' specially designed for the process, to sneaking them in under cloak of darkness - are tense in a 'will they get caught or won't they' way, the arguments presented are messy at best and, at worst, dangerously lacking in balance.

For example, we are told early on that 23,000 dolphins are killed every year but, crucially, there is no indication of what percentage of the population this is. Look closer on the film's official website and it turns out just 2,500 of these are killed in the, admittedly barbaric-looking, 'drive fishing' manner outlined in the film - but then, what method of slaughter of our fellow creatures wouldn't look barbaric if it was done underwater? Given that there are only 26 fishermen in the village of Taiji, presumably their contribution to this death toll is no more than a few hundred - which makes the whole film seem like an incredible overreaction.

There's also no indication at all that the dolphin breeds which are being killed are in any way endangered. The film, irritatingly, drops in the fact that the Yangtze River dolphins are no longer with us, presumably in order to make us think they're all under terrible threat. And yet, the Yangtze dolphin was, sadly, forced into extinction not by fishing methods, but because its sonar couldn't cope with shipping traffic in the waterway. To hold it up as an example and hope your audience will jump to the conclusion you want is very sloppy indeed.

Then there's the issue of why the dolphins are being slaughtered in the first place. The film contends that the fishermen round them up in the hopes of selling off the ones with the cutest smile to dolphinaria and aquaria across the globe for big bucks. The casualties of this are the unwanted mammals, who are then herded off to the cove and culled. All of which makes the filmmaker's decision to target Taiji seem even more odd. It would have been much more interesting for them to chase this particular argument down and find out what those in the West think of the fact that they are complicit in the slaughter.

Maybe it was impossible to get a quote from SeaWorld, or similar - in which case the film should say so - but the niggling suspicion is that director Louie Psihoyos and his supporters, the Oceanic Preservation Society, didn't bother soliciting one because they simply didn't want that side of the argument to be heard. Equally, there is no exploration of the fishermen's contention that they cull the dolphin to protect other fish stocks. This could be a false argument, but you won't find out here.

The film's problems continue as it broadens out its subject to talk about the dangers of eating dolphin meat. Brief interviews with local people seem to indicate dolphin is rarely eaten by anyone and suggestions that the meat is somehow sold on the black market or passed off as other seafood are, although interesting, not well substantiated. The same can be said of the patronising generalisations the film goes on to make about Japan as a nation - that it's their empire instincts that stop them wanting to 'give in' to the West. Turn that on its head for a moment. If Japan suddenly told America or Europe to stop fishing for something in their waters, do we think the West wouldn't feel much the same way about its own issues of sovereignty? There is no doubt that Psihoyos has storytelling skills and is adept behind the camera - but as documentaries go this is nothing more than a good-looking dud.

As for the audience award... it just goes to show that you can fool all of the people some of the time. 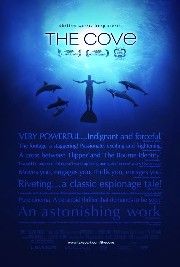 A Whale Of A Tale