Which picture do you most strongly associate with Vincent Van Gogh? For me it's actually The Starry Night, but for most people it's Sunflowers - or at least, one version of Sunflowers. There were originally 12 of them, painted in two series, but one was lost during the bombing of Japan in the Second World War. This film visits the survivors in galleries around the world and tells the story of how they came about.

Part of the Exhibition On Screen series, this is a documentary very much focused on the art itself. We've all heard the dramatic details of the artist's life before, and although it's necessary to touch on them here, most of the biographical detail supplied is limited to the specific period when the paintings were made, and to the interactions with Gauguin which contributed to Van Gogh's approach. Director David Bickerstaff is concerned that because most of us only ever see them in print form, we don't appreciate the three dimensionality of the paintings, and brings his camera in close, at angle, so we can get a better impression of this. It's a good demonstration of what cinema can add to our experience of art and, indeed, as few of us are ever likely to get to stand that close to the originals, it may be the best look at them that we get.

The film also looks at the history of the flowers, which had arrived in Europe from the Americas just a few years before the pictures were painted and had made a huge impression on gardeners and artists alike. It explores how other artists were using them, from Anthony van Dyck's Self Portrait With A Sunflower to Maria von Oosterwijk's Vanitas With Sunflower And Jewellery Box and Claude Monet's Sunflowers. This goes some way to towards dismissing the myth that Van Gogh sought them out as a humble subject, but highlights the differences in how he looked at them: his incorporation of bent stems and decaying petals, which appeared more frequently as the series went on, and his interest in limiting himself to a palette of yellows (shortly after he had spent a year working with pinks) where others sought contrast.

For those unfamiliar with the series, the subtle variety of the paintings itself presents a delight. It's rare to see them side by side, even virtually, and doing so allows for an appreciation of just how cleverly van Gogh applied that colour palette and how his ideas developed over the period. We also learn something of the more recent histories of the individual paintings and are confronted with that age old dilemma in art: whether one should attempt to remove problematic attempts at restoration or accept the whole as a fascinating palimpsest. Further to this, we are reminded that we are not looking at exactly what Von Gogh would have seen anyway, because of the inevitable process of chemical decay in the pigments.

A fascinating opportunity to explore and celebrate these still vibrant works, this film ultimately tells us much more about the thought processes of this fascinating artist than any number of biographies and biopics. We see his innovation, the risks he took in his work, his efforts to stretch himself and the simple joy he found in beauty. You won't look at a sunflower the same way after watching this. 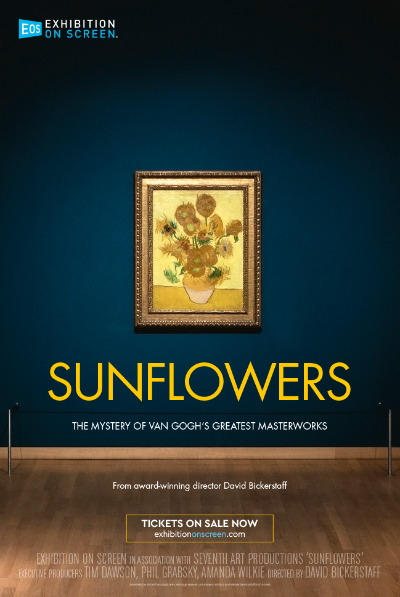 Part of the Exhibition on Screen project, looking at five of Van Gogh's Arles Sunflowers from collections in London, Philadelphia, Tokyo, Munich and Amsterdam.