There have been a number of great sports dramas and documentaries released over the past few years, exploring the pressure associated with competitive potential and the ease with which young athletes can lose control or find themselves controlled by others. Streamline is being sold as such a film, and its twee final credits sequence suggests that is indeed what it aspires to, yet despite the enthusiasm with which it mines the clichés of the genre it manages to say very little about swimming and absolutely nothing new about growing up as a teenage boy in a hypermasculine environment.

The boy in question is Benjamin (Levil Miller), who is known simply as Boy to those close to him, perhaps because he’s the youngest member of his family. His father (Jason Isaacs) is in prison, his mother (Laura Gordon) struggling to parent as she deals with the residual trauma of domestic violence, and his significantly older brothers live elsewhere. Stepping into the paternal role is his trainer (Robert Moragn), who believes that he has Olympic potential and is determined to bring it out of him at any cost. It’s rare for Ben to be asked what he wants, and when that happens it’s usually in the sort of circumstances where a nervous teenager will feel unable to speak his mind. If the people around him really paid attention to his behaviour instead of the results he gets in the pool, they’d see that he’s miserable – and that’s before his father is released, plunging him into crisis.

Miller is a talented young actor and does his best with the material, while Isaacs, though he gets very little screentime, is impressive as always. The story is distinctly mediocre, however, and provides little in the way of real drama, instead relying on the audience’s familiarity with similar narratives and having its stock characters interact in predictable ways. The occasional moments when it breaks with formula suggest that first-time writer/director Tyson Wade Johnston does have some ideas of his own, but perhaps lacks the confidence to develop them much. His direction is pedestrian and the film simply lacks personality.

Curiously, despite the presence of Australian swimming star Ian Thorpe as producer, the swimming scenes don’t feel real – at least not given the level which Ben is supposed to be at. There’s lots of splashing and the sound of hands slapping the water, neither of which should happen with an efficient stroke. We see races at some remove, as if watching an event on television, with no sense of what Ben is experiencing at the time. There’s none of the specificity necessary for a good story. Any other sport might be pasted in and the rest of the film would proceed in the same way. Similarly, Ben is given a girlfriend whose role is to deliver whatever the narrative requires of her at the time, with no consistency or specificity to her character – a waste of young Tasia Zalar, whose recent turn in Wyrmwood: Apocalypse proved that she’s capable of more.

The film is clearly aimed at a young audience and with that in mind, one can forgive it for being a bit overstated, but the dialogue is still pretty awful in places, with lines like “It’s only when you lose your way that you can find out who you are” a reminder of why, even on a low budget, a script editor is worth the investment. This film will doubtless have some appeal to Miller’s fans, but even they are likely to find it forgettable. It may make a splash on opening, but it’s unlikely to go the distance. 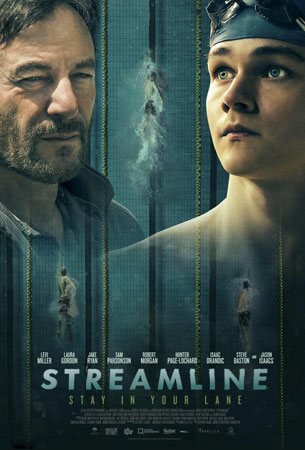 A teenage swimming prodigy self-destructs after his father is released from jail.