David O Russell's Silver Linings Playbook is a revealing look into a very American family. This does not mean it cannot travel, it means the film captures a spirit of place and time with many unsightly nuances that expose and vivisect a reality rarely captured in a big Hollywood movie.

Based upon Matthew Quick's debut novel, a finalist for the 2009 PEN/Hemingway Award, Silver Linings Playbook surprises with twists and turns leaked subtly by an ensemble of actors working together, not against each other.

Bradley Cooper is Pat Solitano Jr, who is being released from a mental institution. As he moves back in with his parents, Pat Sr, played by Robert De Niro as the mirror of his son's future, if he doesn't pay attention, and Jacki Weaver as mother Dolores, whose name and face speak volumes about the decades of sorrow she confronts or avoids daily with the men in her family. Weaver is excellent in screaming out the details of her despondency without saying a word, and De Niro has been an authority on the smiling menace of a lost man fighting for equilibrium since Taxi Driver.

The Solitanos live in the blandest suburban house imaginable, peppered only with the accessories accompanying the quirks of its inhabitants. None of them pretty. The father's massive pile of remote controls is needed to anchor the superstitions that keep him in good faith as a football fanatic and self-made bookmaker. Superstitions, signs, slogans rule their lives and are the playbook that has to be deciphered in order to get closer to a silver lining. There are Eagles fans aplenty.

In voice-over, at the start and finish, Pat comments that he "loves Sundays." At group therapy inside the institution, after Pat spat out the prescribed pill, we first meet Chris Tucker's Danny, a pleasant escape artist, obsessed with his hair, and a seemingly bottomless pit of dubious advice. Following his release, Pat tells his assigned therapist, Dr Cliff Patel (Anupam Kher, who displays some unexpected devotion later on), what havoc Stevie Wonder's song My Cherie Amour can unleash and explains: "My father is the explosion guy - I'm not the explosion guy!"

Russell impressively couples gambling strategies with self-help mantras to expose the machinations of searching minds who don't know how to flee the ugly banal lives of most common betrayals and economic anxieties. The world he shows feels authentic, and what distinguishes this movie from many other family tragicomedies and real life family misfires is that the mental illness is talked about to the person, instead of being ignored or gossiped over behind closed doors.

In order to reconnect with his wife Nikki (Brea Bee), a teacher like he was, who has a restraining order against Pat Jr, he decides to read all the books on her syllabus. Hemingway's A Farewell To Arms upsets him so much that he wakes up his parents in the middle of the night, tells them a hysterical rendition of the plot and throws the book through the window in a jealous rage. It's a crucial scene in the film and one of Bradley Cooper's best. He cannot handle that "that Hemingway guy" and Catherine (the British nurse who is the protagonist within the 1929 novel) don't get a happy ending. Cooper transforms into a blue-eyed little boy, frightened by the world, as he mixes author and fictional plot of the war novel and his own life in total resentment of any reality that does not correspond to the shaky hopefulness he learned at the institution and which has been condensed into the word Excelsior.

To keep himself from detonating, Pat Jr runs. He jogs through the suburban neighborhood wearing a black garbage bag, a harebrained tip for weight loss he picked up somewhere, and an appropriate symbol of how he feels about his messed up life. On his runs, not only does he have to dodge a nosy neighbour kid who wants to interview him for a school project on mental illness, he is ambushed by Tiffany (Jennifer Lawrence), a fast-moving young widow with issues of her own, who has her eyes on him, and runs out of driveways like a bullet ever since they met at a dinner arranged by her sister Veronica.

Veronica is played by Julia Stiles with brilliant timing and tough variance from the first moment she is seen shouting out of a window. Her husband Ronnie, played by John Ortiz as emotionally transparent, while fighting the fragility, is Pat's best friend and another mirror shard that doesn't help much in constructing stable masculinity.

Russell chooses an inspired background for Pat and Tiffany's first non-date. On Halloween night they go to a diner, where he orders a bowl of raisin bran in order to vanquish all romantic possibilities. "You have poor social skills," he tells her after they just met, which is true, and she answers his question about her age with: "Old enough to have a marriage end and not end up in a mental hospital." Lawrence's Tiffany is intrepid, a woman who has experienced enough game playing and does not like the role models her surroundings have to offer, like her outwardly perfect sister with baby and successful husband, who plans renovations immediately after they "just re-did the whole house".

"As you know, I'm banned from the stadium," says Pat Sr, with so much charm and makes you almost forget that Silver Linings Playbook is a family war film with a war.

De Niro, dressed in plaid pants, a white turtleneck and a green blazer, as though he just escaped a Bing Crosby Christmas special, looks on as Bradley Cooper and Jennifer Lawrence dance an absurdly lovable dance, before the family swallows them up. 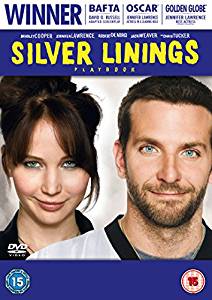 A man trying to reconcile with his wife after a stint in a mental institution finds things get complicated when he meets a mystery girl.

Writer: David O Russell, based on the novel by Matthew Quick