Although he despised labelling, Francois Truffaut was one of the key players in the Nouvelle Vague, which came to define French cinema in the Sixties.

La Peau Douce follows in a similar vein to his earlier masterpiece, Jules Et Jim, exploring the anatomy of adultery, but on this occasion, its fatalistic consequences.

It seems that Pierre (Jean Desailly) has it all: a wife, a child, and a high-flying career as author and academic. When he is invited to lecture in Lisbon, he gets more than he bargained for, meeting and falling in love with a beautiful air stewardess. Embarking on a passionate affair, while covering his tracks, proves harder than Pierre thought, and in the end he is thrown one too many curve balls.

When La Peau Douce was released at Cannes in 1964, the critics slated it as cold, cynical and unrealistic. Three years before, Truffaut, in convivial style, had used a love triangle (Jules Et Jim) to explore life, male/female motives, and the freedom of human choice. La Peau Douce rides a much bumpier road, with a dead end instead of a junction at the finish.

Before making the film, Truffaut spent considerable time with Hitchcock, who's style of filming and fascination with nature's dark side is echoed here. Techniques, such as close ups and freeze frames, are commonplace. Hitchcockean voyeuristic elements are also at work, as Pierre watches Nicole (Françoise Dorleac) change her clothes from behind a curtain, or dance seductively at the club.

Until almost the end, Truffaut deliberately limits the physical role of Pierre's wife to phone calls. This cranks up the tension a notch or two, as Pierre fumbles around, ham-fistedly pursuing his lover.

Jean Desailly's performance, as the awkward, shy and clinical academic, is appropriately understated. However, Pierre's liaison with the beautiful Nicole, half is age, is, as the Cannes critics decided, a bit too contrived. At times, it looks more like a father/daughter relationship than a love affair.

Although Truffaut doesn't delve into the heart of the male/female psyche, the way he did in Jules Et Jim, La Peau Douce once again tackles human needs and motives. The stereotypical perfect middle-class family is stripped from head to toe and cynically reconstructed, with echoes of Oscar Wilde's words ringing in its ears: "One should always be in love. That is the reason one should never marry." 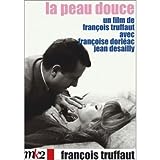 A man begins an ill-fated affair with an air stewardess.

Anne And Muriel
Jules Et Jim
The Woman Next Door