Meet Mike (Mike Pinkney), ne’er do well Dog Groomer by day, edgy video auteur by night. Success eludes him, his storyboard treatment for a remake of Carrie with a cast of cats falls on blind eyes. In his depression decorated house, he wages an ongoing battle for supremacy and bananas with an elusive enclave of rodents. Life takes an unexpected turn, however, when he encounters Cora (Sonja Kinski) over a bleeding dog, and she shows some interest in him. Mike is smitten.

Eventually he gets the nerve up to ask her out, and in short order they are on a date. Suddenly life looks promising once more.

One can’t but help root for Mike, with his innocent doleful features, and calm resignation to his lot in life. Basil Fawlty may have slapped his uncooperative car with a sapling, Mike merely calls a tow truck. Perhaps Basil would have been better off making appropriately captioned videos instead or railing against the universe.

We know that when serendipity then provides Mike with a feline ally in the rat wars that his ill-starred fortunes and the title of the movie itself mean things are not going to go smoothly. He’s doomed, but that slender chance that things might for once go right unleashes a herculean effort

Mike Pinkney playing Mike Pinkney does a great job of convincing us that he’s a lovable nerd conspired against by circumstance rather than life choices.

Sonja Kinski is a delight as that obscure object of desire, gorgeous and unpredictable, she adds yet another element of danger for our out-of-his-depth and luckless lothario. Having not paid enough attention to the opening credits, I thought I was looking at Sonja’s mother, Nastassja Kinski, and the film was wielding spectacular de-aging effects on a par with Scorsese’s The Irishman. Look fast for the Cat People soundtrack cassette lurking in Mike’s truck.

Flula Borg as Mike’s agent, Sebastian, fails to see the virtue of his product, reminding me of Fred Willard’s turn in Best In Show. Honey Davis as Mike’s Zen landlord steals all his scenes (and has a related music video on YouTube to boot).

I hope, for director Michael Reich’s sake, that the autobiographical elements of the story are exaggerated, Michael served his time as a Hollywood dog groomer and video maker. This one isn’t going to win any awards for cinematography as the video ethos holds true for that as well, a few times I was tempted to go adjust the VHS tracking before realising I’m watching a digital playback and that’s intentional.

Very funny in a one day you’ll look back on this and laugh kind of way, this is not When Harry Met Sally, there’s pain at work here. But for those whose ideal date movie is a stolen copy of Congo, perhaps we have a whole new genre: romantic comedies for incels (the involuntary celibate), and that might be just what they need. 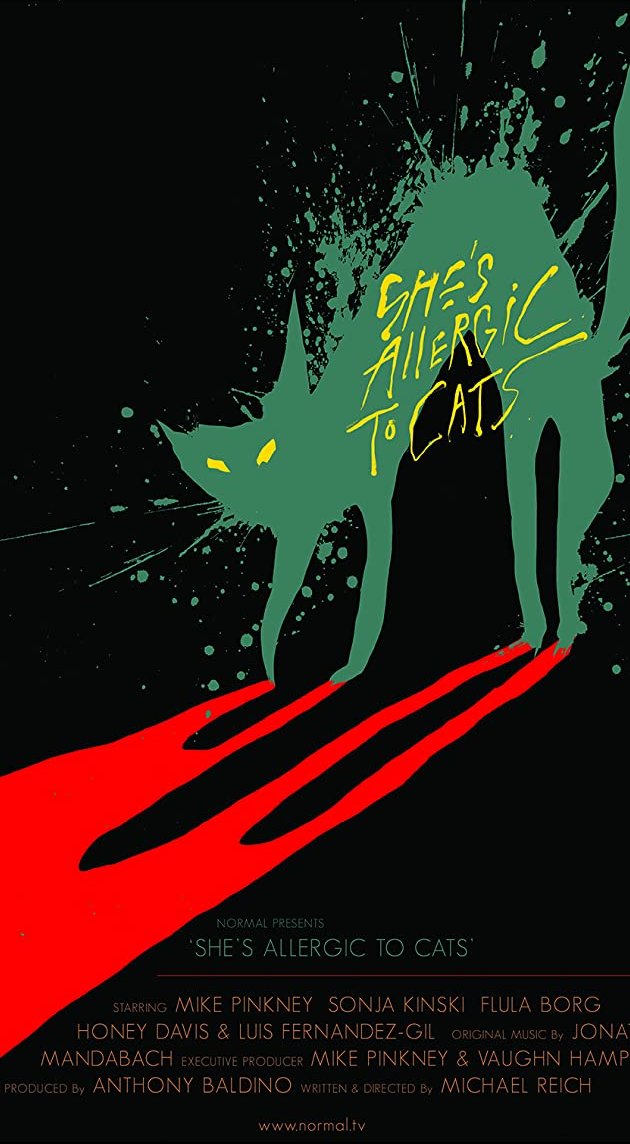 A dog groomer who aspires to make an all-cat version of Carrie meets his dream girl.