In recent years, the title of this film has become overshadowed by two modern movies of the same name: a superb Japanese movie and its American remake, respectively entitled Shall We Dansu? and Shall We Dance. Yet this 1937 classic is worth revisiting not only for its famous Gershwin numbers, but as the last of a series of classic-format films between Fred Astaire and Ginger Rogers. Deeply flawed, yet the tremendous effort poured into its production is evident. And, when viewed as part of a series, touchingly beautiful.

Utilising talent from their earlier films, Shall We Dance pushes the established formula of light romantic farce coupled with stunning dance routines. But here are many innovations and subtle references to delight fans. At the end of their previous film together (Swing Time), Fred serenaded Ginger with the song Never Gonna Dance, so Shall We Dance? suggests a delightful comeback through association. Their respective characters have grown through successive films, as has their onscreen relationship. Now, for the first time, both play fully fledged divas in their own right. Fred is Petrov, a Russian ballet star, and Ginger is Linda, a celebrated jazz dancer. Many of the gags involve rumours about the characters being secretly married or having children. By way of a complex plot, half conducted on a transatlantic liner, the couple do actually get married for the first time in their films together. 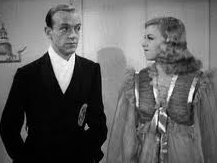 The star personas of both Astaire and Rogers have been carefully managed by the studios since their debut together in Flying Down to Rio (1933). Fred woos her with increasing conviction or intensity in each successive movie. To suspend disbelief effectively, the audience has to be thoroughly confused for a while about the nature of their relationship (in real life, both Astaire and Rogers are married to other people at this time). The onscreen characters are not married at the start of the story – Fred is pursuing Ginger, as usual. But an offhand comment by Petrov to an over-persistent admirer (to the effect that he and Linda are secretly married) is blown up by the newspapers in the story. The only way they can dispel rumours is to get a divorce – which means they first have to get married.

In terms of dance routines, most things had been done already, so Shall We Dance has to come up with something new. One idea is a duet on roller skates. Depending on which account we read, it took filming up to fifty takes to complete (unusually, as Fred would mostly insist on a single one). It’s filmed in Central Park, and the idea is to make it look like something people would naturally be doing. It’s also the longest dance Fred and Ginger have together in the film, and is made even more enjoyable by their singing Let’s Call the Whole Thing Off.

Another innovation is the way the story line is tied up. (Note – a light spoiler follows, but I think it’s worth knowing what is coming in this case, so as not to miss the full effect). Petrov, now distraught that Linda won’t dance with him, has a choreographed scene where he serenades with numerous showgirls who wear Linda masks. This in itself recalls earlier scenes involving a dummy positioned next to a sleeping Petrov, to ‘prove’ in the tabloids that they are married; and also in a flick-book he has that creates moving images of Linda. Unbeknown to Petrov, Linda yearns for them to be together. She insists on being taken backstage. Petrov’s dance involves unmasking the lookalikes only to find that none are the real Linda. When he touches the real Linda’s chin, he finds it is not a mask but really her. She extends her hand and, whoever the ‘real’ Petrov and Linda have been (they both have several identities even within the film), the audience is satisfied that the real living couple finally have a dance of love. Almost all the emotion of the film has been saved for this moment.

Shall We Dance not only reprises two established stars; it examines the real life pressures and glare of publicity facing them. They were both under pressure: during filming, Ginger Rogers received a real-life extortion notice and a death threat to her mother. The movie’s final dance scene maybe hints at something that is beyond words, beyond the glare of the limelight, and something eternally personal – as the song implies: “They Can’t Take That Away from Me.”

The film’s weaknesses include living up to expectations when a formula has peaked. In earlier pairings, Fred’s character woos Ginger through dance rather than words. Here, they enjoy some comedy together but there are maybe one too many dance solos. The plot and characterisation has weaknesses too – Astaire is a very accomplished dancer performing balletic moves, but he was the first to admit he is no ballet star. Dance fans may feel unconvinced (similarly, the songs have been covered by much more competent singers). One of the main dance routines sees Harriet Hoctor, not Ginger, imported to dance with Fred – largely on account of her ability to tap through remarkable back-bends. Shall We Dance lacks much of the natural dance chemistry between Fred and Ginger displayed in earlier films, but it is an outstanding piece of their film history that should not be missed.

Reviewed on: 19 Nov 2011
Share this with others on...
Jazz and ballet collide in the classic Fred and Ginger romance.