Like so many of Akira Kurosawa's films, Seven Samurai, his 1954 epic tale of a few honorable men taking on a much larger number of bad guys, is highly influential. Its reach extends well beyond the direct imitation of The Magnificent Seven, so that its echoes are heard in virtually every film where a disparate crew of men on a mission come together to protect the helpless.

It's easy to forget that beyond its huge influence, it is also hugely entertaining. Kurosawa (and co-writers Shinobu Hashimoto and Hideo Oguni) may employ a basic structure - that has become archetypeal - of a collection of easily distinguishable characters who take on the evil hordes, but he is interested in the intricacies of life, class status and emotional nuance, unafraid of taking ideas into darker more philosphical realms while not forgetting the audience's desire to lap up some traditional action.

The good guys are led by Kurosawa's long-time collaborator Takashi Shimura, whose elder-statesman samurai is inflected with melancholy. Economically set up as a man for whom personal sacrifice is key - he cuts off his status symbol top knot in order to rescue a child - he becomes the yardstick by which his crew are measured. Key among them is fellow Kurosawa regular Toshirô Mifune, who plays Loki-like firebrand Kikuchiyo a man who, crucially, comes from peasant farmer stock despite his desire for samurai status. When we first meet him in a brief, swaggering encounter on the road, we know full well he will soon be back.

Kikuchiyo is at once a joker, the exemplification of the worst aspects of excess - watch him guzzle down saki like an animal or leap intemperately into action - but he also has the virtue of persistence and acts as the samurai's conscience, articulating in one key moment, how the attitude of the peasant farmers is as much a product of the samurai's actions as of their villagers own upbringing. His character may be largely played for laughs but that makes his observations and indiscretions all the more poignant.

The joy of Kurosawa is his storytelling clarity. His characters have clear motivations and trajectories, but are often as much in conflict with themselves as with others - such as the peasant farmer battling his own demons over his kidnapped wife.

As the film moves from the gathering of the samurai to the defence of the village from bandits who want to steal their crop, the energy levels never slip. His characters may find time for contemplation of loneliness and loss but when they move, they are in a hurry, striding out or, in the case of the villagers, scurrying, with the director subtly shifting the pack dynamic so that one minute they are mice on the run, the next hyenas out for a kill.

Shot by Asakazu Nakai, the camerawork is graceful, often sweeping along with a character so that we feel the sense of urgency or carefully circling round a group so that we're drawn into their conspiracy. The landscape is used to emphasise mood, from the flower-coated valley where illicit romance can spring to the rain-sodden village where the peasants stoically await their fate.

The action, when it comes, is impressively handled - from horses running helter skelter through the village to men trying to scale barricades or cross water-filled ditches. Yet, it is in lulls between battles, Kurosawa indicates, that really show the strength of a man.

Sacrifice is a major theme. It may be most evident in the stance of the samurai, but it's clear that the villagers too are giving up much just to survive. A sense of fatalism about the lot assigned to you from birth also permeates, particularly in a subplot which sees a farmer's lass embark on a forbidden romance with the youngest of the warriors (Isao Kimura). But if the societal norms are upheld in the end as the pack return to their fields and the samurais contemplate their lot, the emphasis on the indomitable Kikuchiyo - and the choices faced by the youngest samurai - let Kurosawa also showcase the strengths of rebellion and potential power of the individual who refuses to be confined by expectations.

Seven Samurai may have notched up its sixth decade this year but its powers show no sign of declining and the latest high definition release as part of the BFI Akira Kurosawa Samurai Collection is well worth a place in any film lover's armoury. 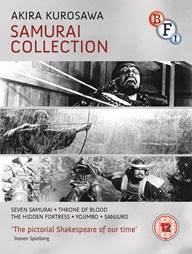 A village enlists a group of samurai to defend them from bandits.