How many hot dogs could you eat in one go?

It started with 13, consumed by the winner of a bet between friends at Nathan’s Hot Dog place on Coney Island. This has grown into a high profile annual eating competition which lays claim to international status, at which the top competitors consume literally dozens at a time. Television audiences thrill at the sight of their favourites packing away, in just ten minutes, more than many families get to eat in a week – and yet underneath it all is a nest of scandals, dubious allegiances and very real health concerns.

Here, documentarians Joseph Ruzer and Sean Slater set out to expose it all. They don’t altogether succeed – this badly structured, somewhat scattershot film will leave you with more questions than answers – but they do manage to entertain and to provide an introduction to a fascinating world. If you raise your eyebrows when you hear participants describe competitive eating as a sport, bear in mind that it takes a really fast metabolism and strong intestinal muscles to pull off such feats – one has to be fit to succeed. Of course, that doesn’t mean it’s healthy behaviour. It’s difficult to shift that much food all the way through, as it were, so bulimia is almost a prerequisite.

If you have even a basic grounding in metabolic chemistry, it won’t take you long to realise that eating like can be very dangerous. The smart competitors look after themselves, spacing out their eating events, but just below them is a whole swathe people who basically need to eat to, well, put food on the table. The prize money is so low that there’s a lot of temptation to take a more risky approach and, yes, some competitors have died. Others asked about that here show sympathy but don’t take the danger very seriously, quick to claim that there must have been other factors involved.

The film badly needs a scientific or medical contributor to explain the issues here, and it doesn’t have one. As a consequence, there is no mention whatsoever of the psychological effects of dramatically distorting one’ metabolism, though one might wonder if that plays into the obsessiveness which some of the competitors exhibit. What it does have is fantastic access to them, and there are a lot of strong personalities keen to advance their points of view. Although the top two competitors in Major League Eating events, Joey Chestnut and Matt Stonie, basically seem like nice guys who manage to keep what they’re doing in perspective, some of the others tear into each other at every opportunity. Juan ‘More Bite’ Rodriguez, who is so keen to tell everyone how sexy he is that one wonders if he’s gotten laid this century at all, tries to make a joke out of the time he sent lye to rival Molly Schuyler in a stunt which could have killed her. Women’s champion Miki Sudo seems to have a different set of problematic behaviours, with her efforts to hang onto a boyfriend who was leaving her having attracted the attention of the FBI.

Are these people really the greatest eaters in the world? Is the competition truly international? It excludes Takeru Kobayashi, the only eater you’re likely to have heard of if you don’t follow the sport, because he refused to sign what he deemed to be a seriously problematic contract. He demonstrates his prowess in separate events instead, which leaves Chestnut starved of serious competition. It’s a problem studiously ignored by George Shea, Major League Eating’s co-founder, a gifted impresario who is tremendous fun to watch but gives the impression of being a much shadier figure off-camera. Hints at the end of the film about connections to the far right are enough to whet the appetite but, sadly, nothing more is provided to substantiate them, nor are any parallels drawn with the long history of corruption, dodgy political dealing and exploitation elsewhere in American sport. Here, as elsewhere, Scarf Face gets close to themes with real journalistic potential and then simply discards them.

Though it’s undoubtedly in the running for any Best Title awards issued this year, Scarf Face sadly doesn’t live up to its promise. That said, there is something oddly compulsive about getting up close to its stars as they do what they do best. At heart, this film is a mystery, tantalisingly unsolved. Where do all those hot dogs go? Are the competitors dimensionally transcendental, like the Tardis? Are they compacting what they eat until it has the consistency of brick? Do they need to consume vast amounts more than other people on a daily basis? For all the horror of the thing, one cannot help but feel a sense of awe. Still, you should probably not try this at home. 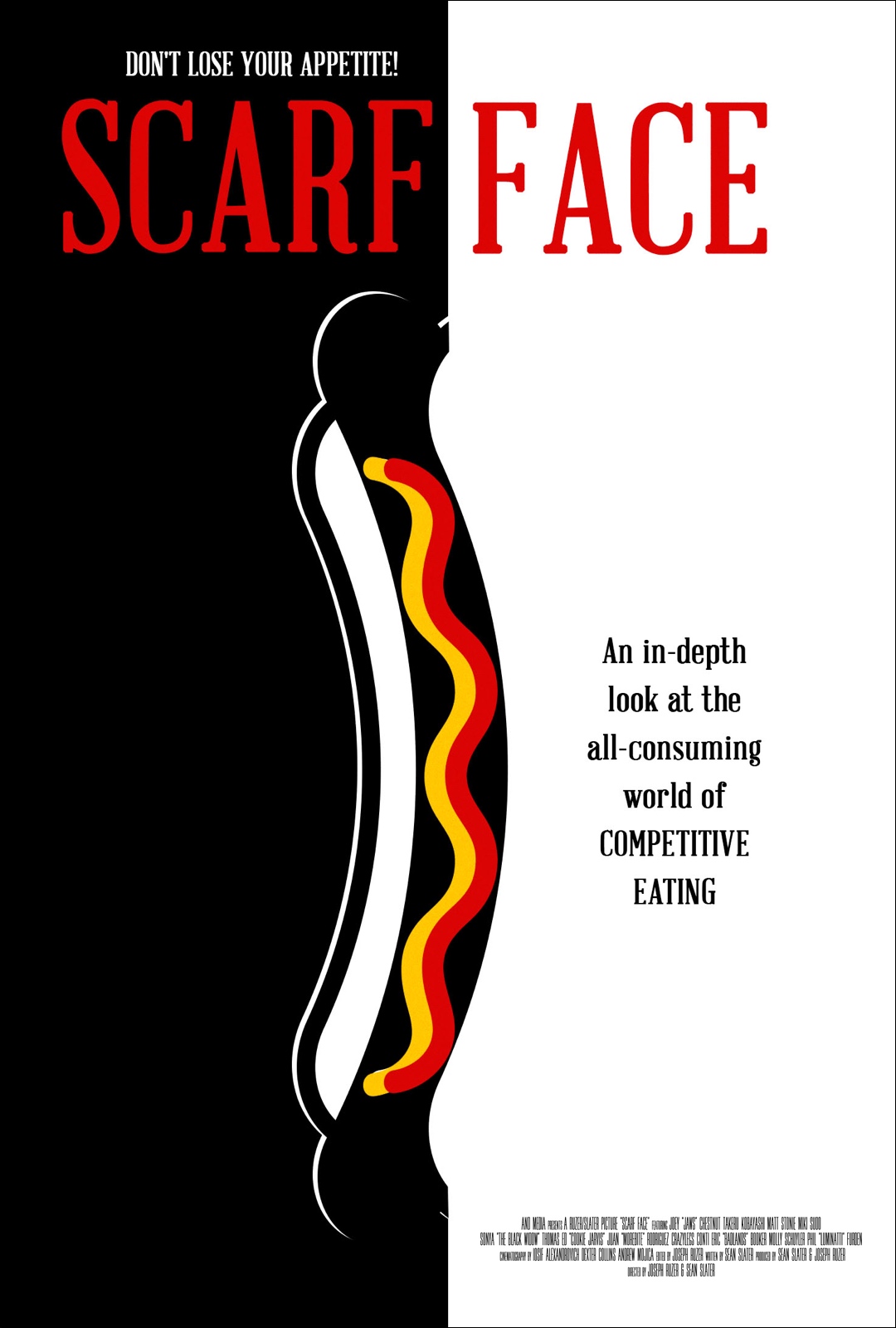 A dive into the world of competitive eating.