Having won acclaim on the festival circuit for his short films, Spanish/Irish director Paco Torres took a bold approach to filming this, his second feature, and although it's not entirely successful it's a strong indicator of talent. In the hands of a lesser director it would have fallen apart but Torres has produced a successful dramatic take on a difficult issue.

Chelsea O'Connor plays Chelsea (everyone here uses their own name), a young woman badly affected by a family tragedy. Whilst other family members get on with their lives - her grandfather (Oliver McQuillan) shielded by his dementia and her mother (Andie McCaffrey Byrne), as his carer, having no choice - Chelsea withdraws into herself. She develops obsessive compulsive disorder (OCD) and can't face leaving the house. Even to go out on the verandah she needs to be swathed in protective layers of clothing. She feels a strong need to defend her space, to have a room she can retreat into where everything is predictable. O'Connor's performance is strong, but as confusing as her behaviour is for those around her, it's also likely to confuse many viewers - the film's realism risks undermining its ability to communicate.

What makes this such an intriguing film is that all of the dialogue is improvised and the story is led by the actors, despite the fact that several of them are relatively new to the industry. This kind of filmmaking is always difficult to handle and Torres does an impressive job in what is only his second feature. All of the characters are well developed and interact naturally (or as naturally as one would expect given their various problems), and the result is a film which, in places, feels almost like documentary. It's an effective way to get close to a subject whic, for ethical reasons, it would be difficult to cover in an actual documentary.

Observing the action, Torres' camera is often static, framing scenes as if they were taking place on stages, in a manner that resembles some of the work of David Lynch. Crisp lighting in scenes where the mother is in control gives way to subdued tones and less formalised camerawork as we enter Chelsea's private world and see her trying to fend off intruders. This isn't a place where she wants to be. The only person who really seems to get it is her mother, but each of them seems unable or unwilling to enter the other's space. It may be that each of them is already at the limit of what she can cope with.

A bleak portrait of a situation in which there seems to be no hope, Saol finds optimism in unexpected places and still manages to hint at the possibility of change. At its heart is the friendship between mother and daughter, developing and growing despite the pressure they're under and showing, as it does so, that life finds a way. 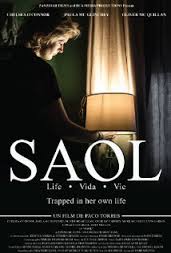 A young woman reacts to a family tragedy by developing a fear of leaving her home.