How does one measure the shape of fear? A shower-intruding assailant? Nope. A sinister government plot taking form in a lead blasting crop duster? Close, but no cigar. OK, how about a dose of ambience? Bingo! Because, in Hitchcock's first - and only - Oscar winner, he teaches us how fear is drip-fed out of the simplest of premises.

Whilst abroad, a young ladies' companion (Joan Fontaine) meets the debonair Maxim de Winter (Laurence Olivier). Whisking her away from a dull existence, he engages in a whirlwind romance, which ends with marriage and a return home to his sprawling estate of Manderlay. But what secrets dwell in these surroundings? And what befell Maxim's previous wife, the eponymous Rebecca?

Emerging from a battle of wills against juggernaut producer David O Selznick, the master of suspense's distinct mark on cinema is a must watch. Appearing unscathed and - most importantly - untouched, his first Hollywood picture contains tantalising hints towards the director's soon to evolve hallmarks. Although Hitch himself wrote the picture off as mere adaptation fare, Rebecca is a thrilling study of guilt and betrayal handled by the deft touch of a master.

Bringing Daphne du Maurier's novel to life, events within the story centre on the ominous Manderlay. Chilling and gripping, straight from the opening trawl through its towering gates, Hitch has you, well... hitched. Forget Freud, or any predilections towards Psycho-analysis, and savour Rebecca's moody visuals. This is Hitch cutting his teeth on a bigger budget and, despite any of his own begrudges, loving every minute of it.

Encased within this isolated location, he keeps character play frosty and refrained. With this ghostly setting, he allows the shrouded secrets of Rebecca's mise en scene to carry the plot forward. This is a neat touch and offers the film its spine-chilling moments. They may be textbook, but fleeting shadows and red-herring scares increase the supernatural elements of a story that is begging to pull the rug out in its courtroom third act.

Only equalled by Twin Peaks' Laura Palmer, the titular female providing all the intrigue casts a looming shadow over the picture. She is the soul; Manderlay is her body. And with this performance her entity walks away with the movie - (gulp) dare we say a stiff has acted Olivier off the screen?

Whatever may be said, this evocative encapsulation of style and theme makes Rebecca one of the best adaptations to translate onto the screen. We may gush, but put basically, this is the complete package and a great entry to both a decade of excellence in cinema and Hitchcock's status as auteur par excellence. 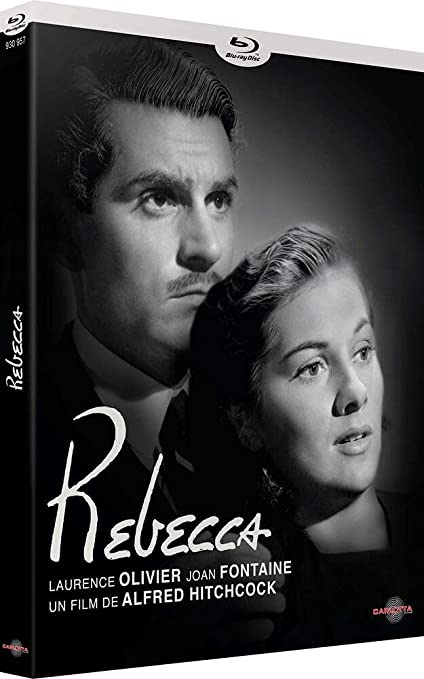 A woman is whisked off her feet by a rich widower, but gets more than she bargains for when she moves into his mansion.