Made as a four-part serial for French television, P'tit Quinquin reaches cinemas with its full running time of 200 minutes intact - which is more than can be said for the dismembered corpses that pile up from the outset of the story. When human remains are discovered inside a dead cow - a bovine carcass swinging like a pendulum in the down draft of the helicopter it is suspended from is one of many outlandish and surreal images - Capitaine Van der Weyden (Bernard Pruvost) and Lieutenant Carpentier (Philippe Jore) are called upon to investigate. As further corpses appear, the policemen continually cross paths with local children P'tit Quinquin (Alane Delhaye) and his sweetheart Eve (Lucy Caron) - the film is rooted in these two partnerships.

The eponymous lad (we never hear him addressed by any other name) is a rapscallion tearaway in the mould of Dennis the Menace - he is disruptive and appropriately juvenile for his age, but not dangerous. He is scolded by virtually every adult he encounters but also seems to be regarded with affection - and his heartfelt devotion to Eve is never in doubt. Meanwhile, Van der Weyden is the kind of maverick detective beloved of the crime genre although there is little typical about him and his behavioural tics (which belong to Pruvost rather than the character - Bruno Dumont cast non-professionals, many of whom have varying degrees of learning difficulties or disability, although this is only mentioned onscreen in relation to Uncle Dany (Jason Cirot)) and haphazard style of investigating do little to further the investigation.

The crime genre lends itself to 'state of the nation' interpretations, with murder frequently revealing the hidden tensions and fault lines beneath the surface of a society. Although infidelity and sibling rivalry emerge as possible motives (as the revelations of extramarital affairs begin to stack up, Van der Weyden likens the town to Dallas), Dumont has threaded immigration and racism in France into this rural idyll. The town is on the northern coastline - not far from Calais - and casual racism and anti-immigrant sentiment is shown to be ingrained or embedded in the town not unlike the armaments dotted around the surrounding countryside - and similarly these attitudes come to the surface much like the WW2 grenades P'tit Quinquin collects.

That both of our onscreen points of identification are implicated in these attitudes makes for discomforting and uneasy viewing, but Dumont - for all the outlandishness of the film in other aspects - prioritises a messy realism over straightforward likeability in relation to his protagonists (although the fact that P'tit Quinquin and Van der Weyden are both innately likeable is partly the source of the discomfort when they espouse such views). There is also a performative aspect to the male characters' behaviour in relation to this theme, whether P'tit Quinquin trying to is enact certain visions of masculinity or Mohamed (Baptiste Anquez) adopting the language associated with religious fanaticism in response to overt and vehement racism, which further muddies the waters (do they believe what they say, or are they playing a role that they think has been assigned to them?).

Nonetheless the film is also seriously funny, and Dumont finely calibrates how he balances the darker underlying issues against myriad comedic styles, from slapstick to the surreal, with the added bonus of actors on the verge of corpsing. A particular standout sequence is the funeral during which the two priests (Stéphane Gallais and Cédric Lemaire) get a full blown attack of the giggles (which spreads to their altar boy, P'tit Quinquin) and struggle to deliver a coherent (or appropriately solemn) service.

Despite its origins - and the chapter headings that signal the separate episodes - the narrative itself has not been designed to deliver television's habitual episodic cliffhangers, and therefore the story and character arcs function as if it was only ever intended as a feature film. Although some cinemas are showing the film split over two days, it is recommended where possible to see the film in its entirety because there is an accumulative sense of weirdness and of the stakes being upped that might otherwise be dissipated. But either way, this is likely to be one of the most enjoyably unpredictable films on our screens this year. 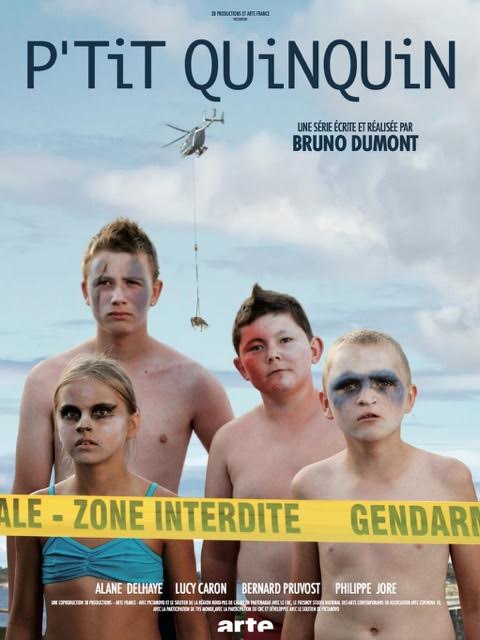 A blackly comic murder mystery develops in a small town in northern France.