What gives a place value? At first glance, the small town where salesman Steve (Matt Damon) turns up to find colleague Sue (Frances McDormand) waiting for him in a run-down truck is not among America's most beautiful. One field looks much like another and Steve, in the course of his career, has seen a lot. He's bought a lot. Then he's moved on, and let the company men move in to pump out the gas beneath, temporarily satisfying some fraction of the country's hunger for fuel. All he sees here are run-down farms, tired people, grass and mud and stunted-looking horses. But there's more to this place than the financial assets under its surface. There's a love for this land that gradually infects the former country boy who thought he'd got away.

The search for real value, the little man pitted against a giant corporation, environmentalism versus greed - these are all cinematic cliches, and director Van Sant knows it. But though he isn't always successful at working around them, he throws in a few more twists to keep the viewer alert at the same time as pulling off a greater sleight of hand. At its core, this is a character study, with the contradictory American character summed up in one man. We see him buying new clothes so he can make himself look like a local. Perhaps it's a sinister trick. Perhaps it simply reflects the fact that Steve doesn't know who he is.

With his chameleon past in films like The Talented Mr Ripley, Damon is perfect for the role, but it's also good to see him writing again. His slow-paced, deceptively simple script fits perfectly with Van Sant's measured style, with the flat fields and those familiar repeated piano motifs. The whole thing is handled with a confidence that carries us along even through its more challenging moments, such as when we are presented with an environmental campaigner (co-writer John Krasinski) who seems just a little too slick to be true. There's a mirroring between the two men that recalls Ripley, even as they fall for the same local beauty (Rosemarie DeWitt), behaviour itself mirrored by Sue's flirtation with a local shopkeeper. These are all people who move in, win hearts and minds, and move on.

Many a film straying onto such territory makes the mistake, intentionally or otherwise, of belittling the locals. Here the townsfolk and farmers are never presented as stupid, just as limited in their power to act, limited in their ability to access information, limited in their choices. They are under no illusions about the importance of money, nor about the desperate straits in which they find themselves, victims of economic crisis and change who are easily forgotten in the cities. Yet as the film shifts pace (things inevitably taking longer that the company intended), we drift into the cyclical time of the rural world, and there's an unspoken awareness that places like this have survived hard times before. No-one can tell them what the future may hold. "We're pioneers," says Steve, literally walking in his grandfather's shoes.

Sometimes the old stories still have value. Poetic yet unpretentious, Promised Land is not simply a eulogy for something we are losing; it holds out the promise of what we might become. 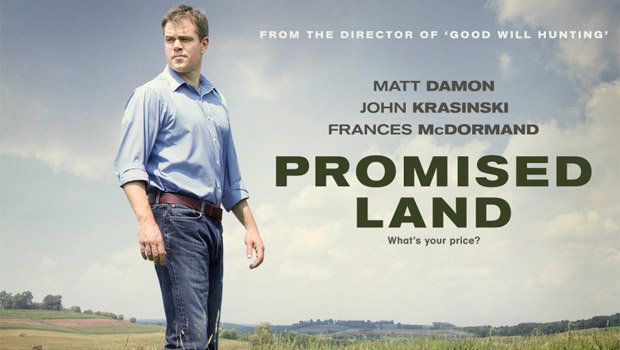 A salesman arrives in a small agricultural town to try and persuade the impoverished locals to sell their land to a natural gas extraction company.

Haynesville: The Relentless Hunt For An Energy Tomorrow