He's the subject of Scotland's first ever major literary work, produced by John Barbour in 1375, and ever Scottish schoolchild knows the story about him hiding in a cave taking lessons from a spider, yet Robert the Bruce has never been given his due in cinema - until now. Despite a valiant effort made by Bob Carruthers in 1996, which was desperately underfunded in relation to its aims, and an appearance in Mel Gibson's technicolor cheesefest Braveheart a year earlier, this great figure has failed to make an impact on the big screen, but David Mackenzie's gory, gritty epic finally sets that to rights.

Like William Wallace before him, the Bruce attains his moment of glory played by a foreign star, but Chris Pine gives it his all, only occasionally letting hint of Steve Trevor's wide-eyed innocence or Captain Kirk's smirk slip through (what is most Kirklike about this character is the way he continually forgets his duty of command and puts himself in harm's way). His accent slips occasionally but he has made a valid point in saying that the language these characters would actually have been speaking would not be intelligible to most viewers - including Scots - today. What matters more in the way he captures the complexity of a man who wanted to be a king but didn't want the personal sacrifice that went with it; a man who sought to fight for honour but had to break every rule to do it; a man famed for his gentleness as well as his steel, and who ultimately won battles with brains rather than brawn.

Pine's outsider status helps him in some ways because it emphasises the gap between the aristocracy and the clansmen on whom power depended at that point in history. A young man with no experience on the battlefield, a lowlander trying to find allies in the highlands, he was really up against it, and Mackenzie's film explores these challenges as well as the wider political and strategic difficulties he faced. Although Pine has stressed that the film isn't about the politics of Scotland's status as a nation today, there are inevitable connections, and these are most visible in the area that is subject to the least analysis in today's debate: Scotland's complex internal politics and the way that competing interests have always confounded those seeking to define and represent its desires. Winning freedom from English rule requires our hero to think big, but assembling the forces he needs to reach that stage requires him to think small - to pay attention to individuals clamouring for justice over dozens of disparate issues, and to persuade them that he won't fail them as others have before.

He's aided in this by an unexpected ally: his English queen, Elizabeth. Played by Florence Pugh, whose work in Lady Macbeth revealed her as a real force to be reckoned with, she's a woman who makes her own decisions without feeling beholden to her origins, and who displays a different kind of courage alongside her husband's bravado. Although there are few female characters in the film - historical war films being principally concerned with men running about in mud - each of them makes a strong impression, and Elizabeth's presence, along with that of people of colour among the extras, also emphasises the notion of Scottishness as something that is not about where one is from so much as where one is going. Further, it allows us to see the Bruce's vulnerability in a way that's important to appreciating the scale of his achievements - he's not yet a legend, just a man with the fate of a nation on his shoulders and unexpectedly vicious enemies to counter.

When it comes to depicting the savagery of those enemies, Mackenzie doesn't hold back. Again, he's alert to internal political issues and also to the intergenerational tensions that drove them to abandon the usual rules of war, but there are nevertheless some truly dastardly characters on display. At a narrative level, this helps to situate the Bruce very clearly as the good guy despite the fact that he's performed a few rather dubious acts of his own. It succeeds in giving the film that Campbellian quality that all Hollywood's most successful historical and fantasy action films have drawn on. (If you're a fan of fantasy you'll also appreciate the presence of a sizeable proportion of the Game Of Thrones cast in supporting roles.)

When it comes to action, the film doesn't disappoint, and the final scenes of men running around in mud are up there with the best. The use of strategy and battlefield tactics is beautifully recreated and Mackenzie even has the right number of performers at his disposal, enabling viewers who are used to working with crowds to continually assess who's where, who has taken the heaviest losses and who has the advantage. Particularly impressive is the way that sharp editing and gruesome sound are used to give the impression of awful things happening to horses, though one can pick it apart and see that there's actually very little stunt work that would put a horse at risk. Mackenzie brings the camera in close, plunging us into the thick of battle and making it count.

This is Scottish historical cinema come of age. Gone are the racist stereotypes of effete Englishmen (indeed, one Scottish islander's homophobia is played against him by another for a joke); gone is the macho nonsense that implies there's always honour in throwing away one's life. The very Scottish sensibility that binds our heroes together is built on shared cultural perspectives and humour rather than on some intangible notion of destiny. The whole is summed up neatly by the traditional music played over the closing credits which ends with the sound of background conversation and laughter, as if we have been sitting in a corner beside ceilidh dancers all night long, listening to the telling of ballad. Carried in the oral tradition, the words may not be quite what they were, but it's the spirit that's the thing. 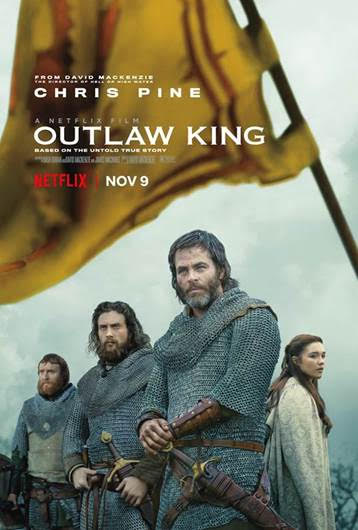 Historical drama about Robert The Bruce.