South Africa at the end of the Eighties was a country in flux. In his late teens, Otelo (Jafta Mamabolo) is a young man from the townships facing similar challenges to those of his nation. He's full of hope for the future but frustrated with the status quo. He wants to get on with the business of living but is held back by his father's superstition and the constant threat of violence. In crying out for freedom, he has yet to discover what he means by the term. But when a friend invites him to go surfing, he discovers a feeling that is not unlike it. Riding the waves, he feels almost as if he were flying through the air.

Bringing together the ordinary difficulties of growing up with the complex adjustments going on in wider society, Otelo Burning presents us with a world where a great deal depends on trust and goodwill, making its hero vulnerable. It's also an environment where there's little work available, so, though everybody is frustrated by poverty, Otelo can pretty much do what he wants with his time - at least when he's not being asked to look after his little brother Ntwe (Tshepang Mohlomi).

Endlessly curious and with little sense of danger, the boy is a magnet for trouble. A dream has convinced their father that he will be killed before he turns 13. Where possible, Otelo leaves him with his girlriend (there's a lot of observational comment on the position of women stemming from the male characters' assumptions) so that he can hang out with his friends New Year (Thomas Gumede) and Mandla (Sihle Xaba) and the middle aged white man they've met on the beach who thinks they could become surfing stars.

Many of the familiar clichés of the surf movie are here, and though the shots of wave riding are not as spectacular as elsewhere, they effectively capture the feelings of the characters involved. The clichés are important because they throw into sharp relief the hideous violence going on in the background, like the radio broadcast covering the release of Nelson Mandela that plays as Otelo's friends rush to save him from a dangerous confrontation. They never weigh the film down because its young leads are so natural and the supporting context so carefully layered.

'Whites Only' says a sign on the local beach, and their white friend grins as he takes a photo of the boys beside it. Elsewhere, some white people glare, but others have clearly got beyond the point where race feels like a big issue to them. In the township, people hide as Kwazulu activists parade throgh the streets, scraping machetes along the ground. Armoured vehicles follow, signs of a troubling alliance. Comrades plot revolution - or perhaps just survival - while teenagers dance and drink and take chances like young people anywhere, their very naivety the stuff of life.

Perhaps in keeping with its hero's name, Otelo Burning gradually morphs into a dark drama about fate and, perhaps, jealousy, but underlying this is a powerful thread of optimism as its young people hurtle toward a brighter future. Not a future where everything will be better but one where New Year, at least, will find freedom in an unexpected place. 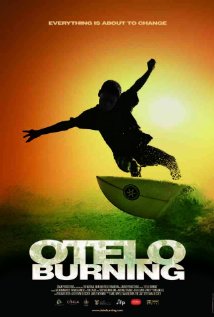 Three friends discover surfing as an escape from the violence of late-apartheid South Africa.