Make no mistake, there is grit in this Northern Soul, the debut film from photographer-turned-director Elaine Constantine. This is not a song-and-dance film, although the music is stirring and the dancing passionate. At heart, it's a story of friendship and working-class aspiration set against the backdrop of the burgeoning northern soul dance culture of mid-Seventies Lancashire. But though this is a celebration of the escapism and camaraderie offered by these hard-to-come by nuggets of American black soul, it is also a clear-eyed view of the scene that doesn't make light of its attendant drug culture, even if - disappointingly for a film by a woman director - its female characters are left firmly on the margins.

The fictional town of Burnsworth could be just about anywhere in the industrial north and it is home to John (Elliot James Langridge) a typically lanky teenager with floppy hair and the social skills of a mouse. Hectored into a trip to his local youth club by his mum (former soul girl Lisa Stansfield) - "He's becoming a weirdo. A recluse at his age!" - he runs into the equally lanky, floppy-haired Matt (Joshua Whitehouse), whose bum fluff moustache marks him out as more streetwise. Matt has managed to sneak a northern soul record onto the DJ decks amid the chart hits and the track - so different from the likes of Melanie's Brand New Key - and Matt's enthusiastic dancing captivate John. "You were like Bruce Lee," he tells him, surely the height of mid-Seventies matey praise.

A friendship is born and the rest of the film sees their ambition to go to the US to find some rare northern soul records so they can make their mark as a DJ pairing tested both by circumstances and growing pains. Matt and John have an enthusiasm for the music but Constantine also captures the aggression that can sometimes rise up gangs of teenage lads, especially when they are taking large amounts of amphetamines in order to dance the night away at the Mecca of Wigan Casino. It's clear both boys are in dead-end jobs, John after he spectacularly ditches school, so the music becomes an outlet for their frustrations, even if only for a few hours a week. Constantine captures the excitement that the promise of a big gathering of like-minded people can bring, even if it is only Wigan, and newcomer Langridge does an excellent job of making John grow up through the course of the film, subtly moving him from mouse to man through a gradual increase in confidence.

The look is spot on for the Seventies, with everything from the garish patterned carpets to the kitchen tea towels hitting the right note, while cinematographer Simon Tindall (a name to look out for, he's also responsible for recent London Film Festival selection The Goob) realistically and naturalistically captures the vibe of the period. Constantine's attitude is mater-of-fact, whether she is depicting fumbled sex in the back of a car to Wigan Casino itself, there is no place for gloss in her story.

The film is so focused on Matt and John, however, that the subisidiary cast pale in comparison. John's love interest nurse (Antonia Thomas) is called upon to do little more than occasionally nudge the plot along and only Steve Coogan and Ricky Tomlinson really making any sort of impact. But with the boys and the music, it's easy to go along with Constantine and forget the rest. Northern soul afficianados are in for a particular treat, with more than 50 songs appearing on the soundtrack and a key role given to Tobi Legend's Time Will Pass You By, which became famous as one of Wigan Casino's 'three before eight' - played each week as one of the final records of the night. Take talcum not tissues. 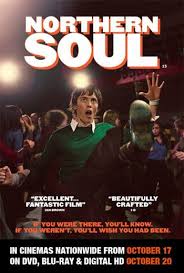 Two boys form a friendship through a shared love of music.