Pablo Larraín's No is a resounding yes!

Advertising executive René Saavedra, played by Gael García Bernal with allure, determination and a deliberate air of innocence, knows what the people of Chile want in 1988, "a product that invites you to be young". It doesn't really matter if you are selling a cola drink called 'Free', a radical new cooking invention for Chile called microwave, or working on a political ad campaign that decides the future of a nation.

We are given the background on military dictator Augusto Pinochet's yes or no referendum after 15 years of presidency briefly and early. Due to international pressure, a coalition of 16 opposition parties was allowed to pay for altogether 15 minutes of TV airtime daily, in the middle of the night, for the mandated 27 days, to convince the population to make a stand and get out to vote "no" to another eight years of total power for Pinochet's regime. The rest of the government controlled airtime belonged to the YES campaign.

"If you want to scare them, scare them with their past," is their motto. And while the YES campaign shows their leader kiss babies, in the trusted marketing tradition of Hitler playing with children and Lenin's love of cats, NO runs with rainbows, picnics, jazz hands, and fun. With a jingle to match and a promise of happiness, the NO campaign and the making-of have an unusual and very clever effect on the audience of 2012/2013. It catches Eighties nostalgia and melds it with the hopes for a future. Whatever the opposite of the future antérieur (the future perfect of what will have happened at a coming point in time) is called, Larraín manages to create a yearning for it.

Some of the most beautiful and dreamlike sequences show Gael García Bernal's adman René Saavedra on a skateboard, thinking, relaxing, seemingly floating through the city, while we hear waltzes on the soundtrack. "I love waltzes," Larraín told me at the 50th New York Film Festival, when I asked him about these scenes that embody the hopes in a future of a nation, or any nation, so well, and he told me that Gael used to be a skateboard champion in Mexico as a teenager.

René's wife Verónica (Antonia Zegers), who doesn't live with him and their son anymore, is serious in her political engagement opposing the regime of terror, torture, and disappearances and gets arrested on a regular basis. She calls René a "mercenary," and the free elections a fraud. The undecided voters fall mostly into two categories. "Old ladies and young people, who think it's fixed." "We are using optimistic language that everyone understands," is the net that catches them all. A campaign suggestion with the focus on "No more disappearances," with grieving wives and relatives, is shot down convincingly by Saavedra. "It's good. But a little ugly." He cuts to the heart of advertising. The YES campaign has footage of Pinochet with Henry Kissinger and Pope John Paul II. NO has Jane Fonda, and Superman Christopher Reeves.

Nominated for an Academy Award as Best Foreign Language Film, No was shot by Cinematographer Sergio Armstrong with an analog video camera (a 1983 Ikegami tube U-matic), which has the effect that it is often impossible to distinguish between archival footage and his own work. I overheard people commenting at last year's New York Film Festival press screening, how fantastic the actor was who played Pinochet, only to find out that it was Pinochet. Larraín's camera is lugged around everywhere from demonstrations to the beach, with much love, though, just like René's little son Simón (Pascal Montero), who watches everything, and hears everything, as his mother is being clubbed down by the police, and as his father receives threatening calls in the middle of the night to stop his NO campaign.

Lucho Guzmán (Alfredo Castro), Saavedra's boss at the ad agency wants to be in with the regime, and is hired in an attempt to rescue the YES campaign, which suffers from "too many tacky fat women and too many ministers." When he complains that his younger colleague and the leaders of the opposition parties are living too easy a life, his contact in the ministry gives him a chilling warning. "If I open that door, you have to close your eyes."

Even though the outcome of the election is well known, No, based on Antonio Skármeta's play, screenplay written by Pedro Peirano, Larraín makes you forget to remember again. Better than most movies, and a little reminiscent of Mad Men in its channeling of the audience's desires, it exposes ideology as hidden on the surface. Two leitmotivs effectively thread through the film: your sense of smell is triggered by oranges and you will most likely change your mind about mimes.

I am seriously (in a Bartleby meets Kenzo sort of way) tempted to get myself one of those sweatshirts with a rainbow and the word NO on it. An ugly past of Eighties TV images is rendered beautiful and the inherently manipulative fundamentals of capitalism grant a celebration of human rights. This is no small accomplishment.

Oscar voters should give No some amour. 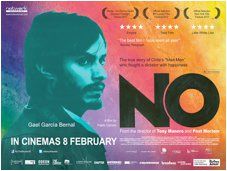 Man in the No
San Sebastian Film Festival Diary: Episode 2