"You're quite vanilla," Holly's boyfriend tells her, just after he's asked if their break-up can be amicable.

"You don't know me at all," she responds.

There's a difference, as every sexual adventurer eventually discovers, between people who do the things they do because they think they're fun and people who feel them deeply. Being in the latter camp is difficult for Holly (Abigail Hardingham) socially, too. Her friends raise eyebrows at her fascination with local guy Rob (Cian Barry). He's recently survived a motorbike accident in which his girlfriend, the eponymous Nina (Fiona O'Shaughnessy) was killed so, they tell her, he won't be good relationship material. She doesn't know how to explain that she's interested in him because of his experience.

In fact, Rob seems to have come through the accident remarkably unscathed; he certainly thinks of himself that way. He regularly visits Nina's parents, sustaining that familial aspect of his past relationship. They tell him gently that he should get on with his life, that it's okay by them if he wants to start seeing someone else. But when he does tumble into bed with Holly, Nina doesn't like it.

There have been a couple of films in recent years about possessive dead girlfriends. Life After Beth trod familiar zom rom com territory. Quédate Conmigo went for the jugular. This film, however, quickly finds a voice of its own, presenting Nina as a ghost with a sometimes solid presence and a disconcerting habit of bleeding all over everything. She doesn't see why she and Rob should consider themselves to have broken up just because she's dead. She doesn't like this stranger in her home, in her bed. Though the only weapon she really has is her voice, she uses that to coruscating effect. But Holly, after an understandably startled initial reaction, is determined to make the situation work.

A character piece disguised, at least initially, as a conventional horror film, Nina Forever really comes to life as, inevitably, the relationship between Holly and Nina grows and changes. Its black humour, deliberately discomfiting social observations and intermittently brilliant wit keep it interesting as its tone darkens and a degree of bleak realism begins to set in. Whether one takes it at face value or treats it as metaphor, it's a challenging take on human sexuality and the shared language of sometimes erroneous assumptions that enables us to navigate relationships.

O'Shaughnessy might easily have dominated the film as the charismatic Nina, but the real standout here is Hardingham, going into emotional territory few actors get the chance to explore and doing it with conviction. Barry has less to work with but still makes us feel for the increasingly bruised and vulnerable Rob, putting across enough personality to make Nina's attachment to him convincing. Between them, they strike just the right balance between comedy and tragedy, steering a challenging and sometimes uneven story along a difficult road. This is brave and intelligent filmmaking. It doesn't always hit its targets but it bodes well for the future work of all involved. 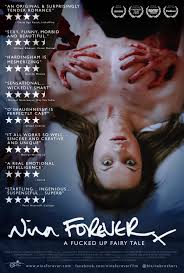 A checkout girl fascinated by death hooks up with a suicidal bereaved man - but his dead girlfriend isn't ready to let go of her man.