In a bottle factory in a French provincial industrial town, Pierre (Gerald Laroche) switches to the night shift to earn more money for his wife Carole (Luce Moucel) and 12-year-old son Victor (Bastien Le Roy). He's eager to help the family do better. Carole is working hard in the hotel business and they're in the process of building a new house. So Pierre wants to get along with his new team, the night crew on Oven 2. And, with his easy-going nature, he fits in with everyone. Everyone, that is, except Fred (Marc Barbe).

Fred is a violent, complex character who bullies and humiliates Pierre from the first day. His taunting unsettles him, which starts affecting his home life. But each time, just at the point where Pierre can't take it any more, Fred changes and appears to be his friend. Is he to be trusted, especially when Victor, initially angry at Fred, decides that he is a better father figure than his dad?

Philippe Le Guay is a critic-turned-director, who has tried to make a strange hybrid of a film, a psychological thriller shot in a naturalistic style. The key setting of a glass factory allows what would normally be a boring place come alive with fire and danger.

Both Pierre and Fred are wonderfully balanced characters. There is a hint of the pathetic in Pierre and the possibility of a heart in Fred. There's also a distinct homoerotic subtext, which, although never voiced, is clearly the cause for much of the friction and the breakdown in Pierre's relationship with his wife.

The constant menace of Fred keeps you on edge throughout the film and you end up wanting to slap Pierre for being such a coward. In the end, it's difficult to say who is the real coward, only that Pierre resorts to using Fred's approach to conflict resolution.

This is a film with fine acting, camera work free of frills and a plot that will keep you guessing. Ultimately, though, there's a little too much restraint to make the film as provoking as its characters. 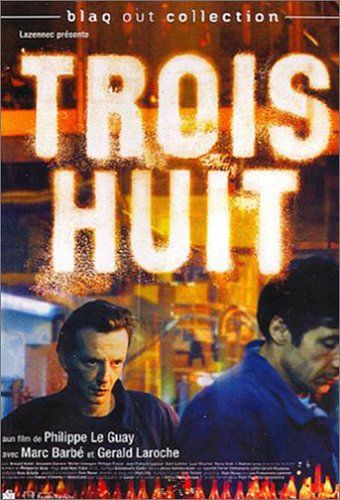 Would you be friends with this guy?